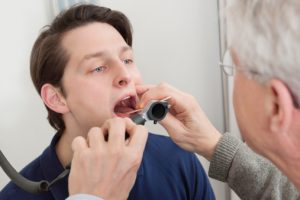 Obstructive sleep apnea risk may be linked to the size of tongue and tonsillitis. The findings of the study found that dentists may be able to provide valuable information on how someone sleeps, as they are constantly looking into their patients’ mouths and can observe an enlarged tongue or tonsillitis.

The study found that an oversized tongue and tongue indentations are a risk factor for obstructive sleep apnea, and obese patients are 10 times more likely to experience such symptoms compared to non-obese patients.

Dentists do not diagnose sleep apnea, but they can determine if a person has an enlarged tongue or tonsils, which can contribute to sleep apnea. Lead researcher Thikriat Al-Jewair said, “Dentists see into their patient’s mouths more than physicians do and the signs are easy to identify.

The study looked at 200 patients at dental clinics and the researchers studied the patients for obstructive sleep apnea by using the Berlin Questionnaire. Participants were screened for sleep apnea risk factors, including body mass index, neck circumference, blood pressure, size of the tongue, tonsils, and uvula.

Twenty-three percent of the participants were at risk of obstructive sleep apnea and in that group, 80 percent were male.

Common risk factor, aside from obesity and neck circumference, was a large tongue or tonsils.

As you can see, many of these risk factors are changeable, which means you can work actively towards lowering your risk of developing obstructive sleep apnea.