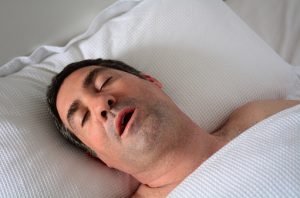 The researchers found that 61 percent of patients had high scores on the questionnaires and significantly lower kidney function. The researchers concluded, “This study shows that a high-risk score for obstructive sleep apnea is common in non-dialysis CKD patients with diabetic nephropathy and is associated with more rapid loss of renal function. This simple approach identifies patients at higher risk of CKD progression.”

The researchers looked at 254 patients from nephrology clinics and hemodialysis units who all underwent an overnight cardiopulmonary monitoring test to determine the prevalence of sleep apnea and nocturnal hypoxia. Patients were divided into one of three groups: Those with an estimated glomerular filtration rate (eGFR) at or above 60 mL/min per 1.73 m2(n=55), patients with chronic kidney disease, and patients with end-stage renal disease.
As eGFR declined, rates of sleep apnea increased. Furthermore, nocturnal hypoxia was higher among those with chronic kidney disease and end-stage renal disease, but results were similar among the two groups.

The researchers reported, “The chronic hypoxia hypothesis suggests that chronic ischemic damage in the tubulointerstitium of the kidney is the final common pathway for the development of ESRD. If such a process is already under way in patients with CKD, it is possible that ongoing nocturnal hypoxia will amplify the effect and accelerate the decline in kidney function.”

The researchers suggest that treatment of nocturnal hypoxia could slow down the progression of chronic kidney disease into end-stage renal disease.

The researchers also noted that a history of snoring was also seen among all three groups, prompting researchers to believe that kidney disease patients should be evaluated for respiratory abnormalities.

The researchers did note limitations to the study and added, “Further studies are required to determine whether treatment of sleep apnea and nocturnal hypoxia improves these clinical outcomes in patients with CKD.”