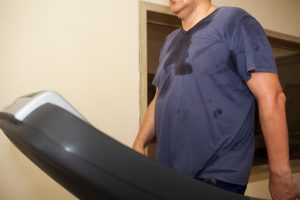 Obstructive sleep apnea (OSA) is associated with impaired exercise capacity and poor aerobic fitness. The findings come from the University of California, San Diego School of Medicine, where researchers found that patients with sleep apnea intrinsically burn more oxygen during physical activity, compared to those who do not have the sleep disorder.

Obstructive sleep apnea is a sleep disorder, where a person stops breathing numerous times throughout the night. Because of this, individuals with sleep apnea tend to have lower peak oxygen uptake during physical activity, compared to individuals without OSA.

Furthermore, patients with sleep apnea often tend to be overweight or obese – compared to people without the condition – which could contribute to their decreased physical fitness. However, the researchers found that – in comparison to individuals with similar body mass indices – patients with sleep apnea still perform worse than overweight or obese individuals without OSA.

Lead author Jeremy Beitler said, “Encouraging patients to exercise more is part of the story, but that is not the whole story. We believe the sleep apnea itself causes structural changes in muscle that contributes to their difficulty exercising.”

Results from the tests uncovered that those with sleep apnea on average had lower VO2 max – measurement of maximum oxygen output – compared to control subjects. Furthermore, the frequency of stopped breathing incidents for longer than 10 seconds a night could help predict 16 percent of variability in a person’s VO2 max.

Aside from reducing exercise performance, sleep apnea can contribute to additional heart problems as well. There has been a rise in sleep apnea cases, and studies have revealed that nearly 26 percent of Americans suffer from the sleep disorder, while only 10 percent are aware of it.

Here is a list of associated heart problems linked to sleep apnea.

Stroke: studies have shown an increase risk of stroke and dementia with sleep apnea. Treatment with a CPAP device can lower this risk.

Coronary heart disease: blockages of arteries due to an increase of cholesterol and sugar levels.

Sleep apnea treatment is commonly done with a CPAP device, which is worn throughout the night and offers continuous air pressure in order to prevent the stoppage of breathing.

Healthy lifestyle habits, too, can help improve sleep apnea as well as your heart health. Exercising, eating well, and maintaining a healthy body weight can go a long way for your heart and sleep apnea.