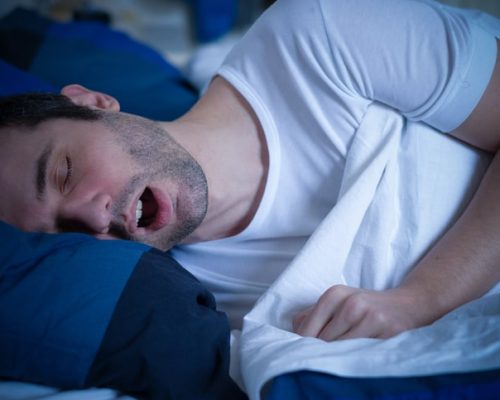 Obstructive sleep apnea is a fairly common condition affecting breathing patterns during sleep. It causes a person to repeatedly stop breathing for short intervals of time through the night, which can lead to decreased oxygen in the blood, having detrimental effects on the cardiovascular system and the brain. In the past, research efforts surrounding obstructive sleep apnea (OSA) have focused on its effects on cardiovascular conditions.

So far, there is limited information on the relationship between sleep apnea and ventricular arrhythmias and tachycardia, which is why a group of researchers decided to examine it in a new study. Ventricular arrhythmias are irregular heart rhythms, one of which is ventricular tachycardia (VT), an abnormally fast heart rate, that occurs in the ventricles in the heart due to faulty electrical signals. They can eventually lead to cardiomyopathy, which is a disease in the muscles in the heart.

To do this, the researchers gathered and analyzed data collected through the National Inpatient Sample between 2012 and 2014. This included over 18 million health records, of which around 900,000 suffered from obstructive sleep apnea. All of the data were collected from patients over the age of 18. The researchers were able to determine the incidence of ventricular arrhythmias and ventricular tachycardia by identifying the corresponding medical codes on patient charts.

Patients with OSA Have a Higher Rate of Ventricular Tachycardia

The results of the analysis showed a clear positive correlation between obstructive sleep apnea and ventricular arrhythmias. The patients with sleep apnea showed a near double incidence rate of ventricular tachycardia than those without sleep apnea. The OSA patients also showed a higher prevalence of diabetes mellitus, hypertension, chronic kidney disease, acute coronary syndrome, and heart failure.

This study had several strengths and limitations. It is the first of its kind to analyze this relationship and used a large, representative, sample population to establish its findings. The results were also tested against multiple potential cofounders, giving them an even higher validity. This study, as an analytical examination at its core, is unable to offer any causality behind the relationship between obstructive sleep apnea and ventricular arrhythmias.

Also, due to the nature of the study, the researchers were unable to confirm for absolute certain the diagnoses of obstructive sleep apnea or ventricular tachycardia. However, studies have shown in the past that the use of the particular medical codes provided here as evidence for the existence of these conditions in the patients whose records were analyzed have an accuracy of 90 percent when the conditions are cross-confirmed with an examined diagnosis by a medical practitioner.

“OSA results in a multitude of cardiovascular pathophysiological changes that result in cardiovascular morbidity and mortality. Our analysis finds that OSA is associated with VT and might be a predictor for the development of ventricular arrhythmias. Despite the large number of subjects analyzed to examine the relationship between OSA and VT, the nature of the database prohibits the establishment of causality. Prospective studies are needed to confirm the theory that OSA causes VT,” conclude the study authors.