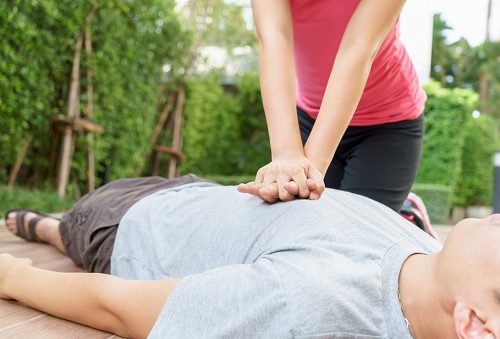 By definition, obstructive shock is considered a serious medical emergency and should be treated as soon as humanly possible, as it could be potentially fatal. Obstructive shock occurs when the heart endures insufficient diastolic filling (when the heart is supplied with a fresh stream of blood). Without regular diastolic filling, the heart can’t adequately perform its cardiac functions, which means that fresh supplies of blood won’t be pumped to the other organs in the body.

This lack of blood flow to the heart is caused by a major obstruction, which causes the organs and cells in the body to go into shock because they’re being deprived of the oxygen and vital nutrients they require to function at full capacity.

There are a few different potential causes of obstructive shock that are associated with blockages either within the heart or other parts of the body that deliver blood to the heart. These include the following physical conditions:

Cardiac tamponade is a serious condition that occurs when fluids overflow the area located between the heart muscle and the sac in which the heart is encased. These fluids—which are mostly comprised of blood molecules—are supposed to make their way to the heart so that they can be pumped and delivered to other parts of the body.

However, arterial blockages prevent a sufficient amount of blood from getting through to the heart, and eventually, this ventricle can overfill. The immense weight of this fluid accumulation places an overwhelming amount of pressure on the heart muscle and prevents it from functioning normally. The heart’s ventricles are kept constricted rather than expanding as they’re supposed to, and therefore the heart is unable to pump blood to other parts of the body. This lack of blood supply can cause the other organs to go into potentially fatal obstructive shock and eventually fail.

Another serious and potentially fatal condition involving a lack of sufficient blood flow through the heart, aortic dissection is essentially a massive tear in the large blood vessel that’s attached to the heart. This is the muscle that delivers the blood to the heart and when it’s damaged or dissected, the blood that runs through it escapes through the tear.

If the tear is especially large, more blood will escape through the gap rather than being delivered to the heart as intended. While this is a rare condition, it’s most likely to affect men in their 60s and 70s. Early detection is imperative but incredibly difficult, as this condition shares some of the same symptoms as other health problems.

Pulmonary embolisms occur as a result of blockages in the arteries in your lungs and they’re typically caused by blood clots that come from your extremities, most commonly the legs. If left undiagnosed or untreated for too long, this condition can end up being fatal.

Tension pneumothorax due to obstructive shock occurs when blunt force trauma damages the lungs and causes air to leak out of the respiratory tract before it’s been properly processed. When a blockage occurs in the lungs, air can become trapped in the pleural space where it’s briefly stored before being exhaled. The lungs continue inhaling air without breathing it back out. The more air that becomes trapped in the pleural space, the more pressure is placed on the thorax. This can eventually cause the lungs to collapse.

Essentially, systemic hypertension is high blood pressure that occurs in the systemic arteries of the heart. Systemic arteries are responsible for transporting blood from the heart to tissues and organs within the body. When the arterioles (small arteries) become constricted for an extended period of time, proper blood flow is impossible and the heart is forced to go into overdrive to pick up the slack, which increases arterial pressure. As a direct result of this condition, the organs, tissues, and cells in the body don’t receive a sufficient supply of nutrients and oxygen and can eventually go into serious obstructive shock.

Also read: What is the significance of mean arterial pressure (MAP)?

In the case of vena cava syndrome, blood is actually blocked from entering into the heart muscle to be oxygenated and pumped into other parts of the body. This blockage is typically caused by a cancerous tumor that must be removed immediately.

Talk to your doctor to learn more about obstructive shock causes.

What are the symptoms of obstructive shock?

All signs and symptoms of obstructive shock should be taken very seriously and treated immediately as they have the potential to cause death. The symptoms of obstructive shock may vary depending on the condition that’s causing it and the parts of the body that are being affected, so it’s recommended that you report any unusual medical occurrences to your doctor because early detection is important.

Keep in mind that obstructive shock symptoms are also common among other medical conditions. Here’s a list of what you should be looking out for:

If you’re experiencing one or a combination of the abovementioned signs and symptoms of obstructive shock, you should seek medical attention immediately, as this is a life-threatening condition.

The first thing you should do if you or someone in your vicinity is enduring obstructive shock is to get yourself or the person to the hospital as soon as possible. Never drive yourself to the hospital, especially if you’re feeling faint or lightheaded. Always ask someone else to take you. Administer basic CPR to the person who’s experiencing obstructive shock until medical help arrives to try to get their heart to pump blood again.

Employ your absolute best efforts to keep the person conscious and keep checking their pulse and circulation. As the condition progresses, the person’s breathing will become increasingly shallow. To reduce some of the pressure from their body, lay them down flat on the ground or on a comfortable surface to avoid injury in case they do lose consciousness. Keep their head flat on the ground to make it as easy for them to breathe as possible.

Obstructive shock is a very serious and life-threatening condition that should never be ignored. Although it initially affects the heart and the lungs, its symptoms can rapidly spread to other parts of the body that lack sufficient nutrients and oxygen that’s required to function normally and survive. If you notice anyone exhibiting the abovementioned symptoms while out in public, make sure to call 9-1-1 immediately and stay by their side. Your assistance could help save a life.

What is vasoconstriction? Causes, symptoms, and treatment of constricted blood vessels