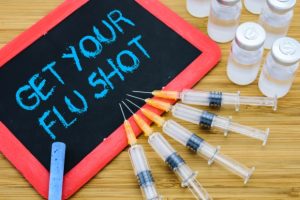 Flu season is upon us, but are you prepared? Although the flu rates haven’t been that threatening as of yet, this doesn’t mean you shouldn’t be getting your annual flu shot. Lynnette Brammer from the CDC said, “The fact that flu activity hasn’t picked up dramatically yet means there is plenty of time for people to get vaccinated if they haven’t already.”

So far, this year’s flu season is looking similar to last year’s – a very late and slow start. Flu strain H3N2 is most predominant, but H1N1 strain is also circulating. Last year, H3N2 started off as the dominant strain as well, but was overtaken by H1N1 later on.

Brammer explained, “It’s similar to a lot of years right now. Things should start to pick up in the next few weeks, but we’ll see. Last year, things didn’t really pick up until the first of the year. Right now, there is nothing that’s really concerning.”
Last year’s flu impact was particularly detrimental amongst seniors, so this year, seniors should really take the necessary steps to protect themselves against the virus as much as possible and thus reduce the risk of complications.

Every year, over 200,000 Americans are hospitalized with flu complications. Flu death rates vary by the year. The flu season typically peaks between December and March, but may even carry over into May.

It’s not too late to receive your flu shot, especially if you are particularly susceptible to the virus. Reduce your risk of the flu and complications, and go get yourself vaccinated.