Home » Health News » Not too late to get the flu shot, flu season reaching its peak 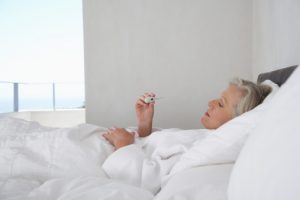 With flu season ramping up, it’s still not too late to protect yourself with the flu shot. Lynnette Brammer of the CDC explained, “Flu activity is still pretty low, but it’s starting to increase.” So far the hardest hit places in the U.S. are New Jersey, Puerto Rico, New York, along with the Southeast and Northeast. The most common virus strain reported is H3N2, which is part of this year’s vaccination.

Brammer continued, “And this week for the first time, we have data on initial hospitalizations. The range of hospitalization is still low, however. As you would suspect with a H3N2 season, the highest rate right now is in the elderly. We don’t know how severe the season is going to be, so there is still time to get vaccinated. And getting vaccinated is the best way to protect yourself.”

This year’s flu season is starting out in a similar way to that of last year, with H3N2 being the predominant strain. Still, H1N1 is also circulating and it could rise to become the more dominant strain – just like last year. While last year’s flu season didn’t quite pick up until the New Year, this year it started rolling out much earlier.
Flu complications are more common among younger children and the elderly, so it’s important that these age groups get vaccinated, especially because this year’s vaccine is a good match for the circulating strains out there. The CDC reports that this year’s flu shot is a 40 to 60 percent match.

It’s advised that you receive the flu shot prior to the start of the flu season because it takes several weeks for your immune system to produce antibodies, but that doesn’t mean you still can’t get vaccinated now in the midst of flu season. Getting the flu shot increases your defense against the virus, all the while decreasing your odds of contracting and spreading the flu.