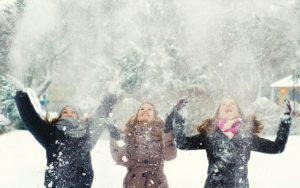 During the winter, many people suffer from season depression thanks to the short and dreary days, so to help us cope experts from Norway have developed a secret: Change your mindset.

The findings come from researchers in Tromsø, Norway, where the sun barely breaches the horizon during the winter months due to its northern location.

Researchers decided to study the mental states of the residents of Tromsø during the wintertime because they actually have lower rates of seasonal depression, especially compared to what is expected in a place that has very minimal sunshine – one of the major causes of seasonal affective disorder (SAD).

When researchers first visited the town they aimed to find out why more people aren’t depressed, but upon their arrival the answer seemed obvious. Lead researcher, Kari Leibowitz, said, “People view winter as something to be enjoyed, not something to be endured.”

Leibowitz also found that in Norway there are many smaller, closer knit areas with strong social ties, which may be difficult to replicate in other major cities. But she did manage to take away some lessons that can be incorporated into our daily lives to help us deal with winter.

For starters, Leibowitz found that Norwegians celebrate wintertime activities. “People couldn’t wait for the ski season to start. There’s a saying that there’s no such thing as bad weather, only bad clothing.” It is known that being outdoors can boost mood and Norwegians take every opportunity they can to be outside, especially in the winter.

Norwegians also have the word koselig, which means a sense of coziness. The word is similar to the feeling evoked by Christmas, but without all the holiday stress. Residents drink warm beverages, light fires, and cuddle under large blankets to create koselig.

Furthermore, there are many festivals and celebrations that unite the community and create a togetherness during the winter months, which can boost health.

Lastly, Norwegians appreciate the beauty of winter. Because the sun doesn’t fully rise, for many hours of the day the skyline looks like a sunrise and sunset, all at the same time. And the way the sun reflects off the snow is truly a sight to see.

Leibowitz concluded, “One of the things we do a lot of in the States is we bond by complaining about the winter. It’s hard to have a positive wintertime mindset when we make small talk by being negative about the winter.” Therefore, to actually enjoy the darker months and get through winter with a positive attitude, you need to change your mindset and promote positivity. Take a page from the Norwegian book on winter happiness and get outside, create coziness and maintain togetherness to ward off SAD.