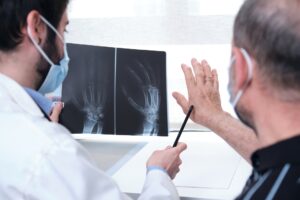 Despite previous claims, new research suggests that diet doesn’t play a role in easing symptoms or progression of osteoarthritis and rheumatoid arthritis. A healthy diet has been found to bring many health benefits, but researchers say that the impact on rheumatoid and musculoskeletal diseases is minimal.

Cardiovascular and mental health may be influenced by diet, but researchers believed that evidence for its influence on symptoms and progression of rheumatic and musculoskeletal diseases was not concrete. To try and find an answer, the European League Against Rheumatism (EULAR) set up an international task force to look at the potential impact of diet, exercise, weight, smoking, and alcohol on disease progression.

In total, 24 systematic reviews were included in the pooled data analysis and 150 original research articles. The evidence for most dietary interventions for both rheumatoid arthritis and osteoarthritis was graded as poor or very poor, meaning the number of studies and participants was limited. There was moderate-quality evidence for probiotics, vitamin D, and fish oil, but the impact was minimal.

“Therefore, based on the current evidence, there is no single dietary intervention which has substantial benefits on the outcomes of people with osteoarthritis and rheumatoid arthritis,” conclude the authors.

While this new research did not find a direct correlation between diet and disease progression, those who live with these diseases should still make sure they eat healthily and not put on too much weight as this could worsen symptoms. This study is one of the first to find no effect of diet on the disease, so more research will be needed to further document and confirm the findings.

As you age, your joints may require support to help them stay strong, flexible, and healthy. Healthy Joints contains multiple ingredients to help support and improve joint health. The primary ingredient in Healthy Joints is AprèsFlex®, an extract from Boswellia, which has been found in studies to provide rapid support for joint health and mobility. This unique formula also contains glucosamine and chondroitin, which contain compounds that are some of the building blocks of healthy joints.

Supporting bone health is also essential as you age. Bone Rescue can help to support the maintenance and development of bones thanks to its unique formula, including strontium. Chemically similar to calcium, strontium can provide great support for aging bones. Bone Rescue contains 680 mg of strontium along with additional ingredients to help keep bones strong and healthy.