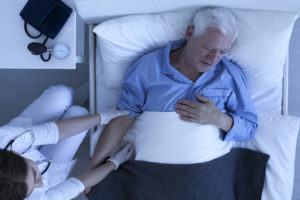 Blood pressure normally goes down during the night, but for some, it could stay the same or even go up, leading to damage in the brain. A new study published in Neurology®, the medical journal of the American Academy of Neurology, suggests that high blood pressure at night may cause damage to small areas of the brain from vascular disease, leading to memory problems.

When blood pressure drops during the night, it is referred to as “dipping.” When it stays the same or goes up, it is called “reverse dipping.” Study author Adam M. Brickman, Ph.D., of Columbia University in New York, set out with his colleagues to find what repercussions dipping or reverse dipping had on the brain.

“The results add to the mounting evidence that shows the importance of vascular risk factors in contributing to memory problems,” said Brickman. “They also point to the potential impact of preventing high blood pressure through efforts such as maintaining a healthy weight, being physically active and having a healthy diet.”

The study involved 435 participants from Venezuela with an average age of 59. They were all required to wear blood pressure monitors, which took their pressure every 15 minutes during the day and every 30 minutes at night. They also had brain scans that looked for the small areas in the brain that appeared damaged from vascular disease, called white matter hyperintensities. Memory and thinking tests were also given to each participant.

Those with high blood pressure and reverse dipping were also more likely to show lower scores on a memory test than the other participants. They scored an average of 33 compared to other participants who averaged 40 scores. The difference in cognitive ability tests can be accounted for by the difference in blood pressure and dipping status.
“It appears that reverse dipping may amplify the effects of high blood pressure on people’s cerebrovascular health and associated cognitive abilities,” Brickman said.

While this study did have limitations, it is a good starting point for more research to dig further into the association between white matter in the brain, high blood pressure and low blood pressure at night.

“Longer studies that follow people over time will be needed to determine whether these factors do indeed lead to white matter changes and memory problems, although our initial findings are indeed consistent with this hypothesis,” Brickman concluded.