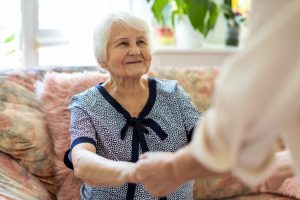 Blood pressure should drop at night as your body begins to shut down and prepare for sleep. But it might not. If it doesn’t, there could be significant consequences for brain health.

Everybody’s blood pressure varies, but it’s generally higher during the day than at night. In some, however, this is not the case; they experience blood pressure spikes at night, flipping the pattern on its head. This is a phenomenon called “reverse dipping.”

New research shows that older men who experience reverse dipping are at an elevated risk for Alzheimer’s disease.

There is plenty of research to show how vital good sleep is for brain health. Some work shows that natural maintenance crews run through the brain to clear out waste products during sleep. These waste products may contribute to dementia.

It appears that abnormal blood pressure patterns, like high blood pressure during sleep or at night, can impair this process. Waste products may not be adequately removed and thereby boost the risk for Alzheimer’s.

Researchers from Uppsala University in Sweden looked at how this critical window for brain health is affected by blood pressure. After analyzing data from 1,000 Swedish men over age 70, they found reverse dipping was closely associated with Alzheimer’s risk.

Over a 24-year tracking period, men whose blood pressure went up at night were 1.64 times more likely to develop Alzheimer’s than those with normal blood pressure patterns, also called “normal dipping.”

The study, published in Hypertension, only followed men and would need to be replicated with women to learn if results are applicable to both genders.

How do you know if you are reverse dipping? It would require wearing a blood pressure monitor during sleep. Unfortunately, this pattern may be natural, and treatment patterns, like blood-pressure-lowering drugs, are still being examined.