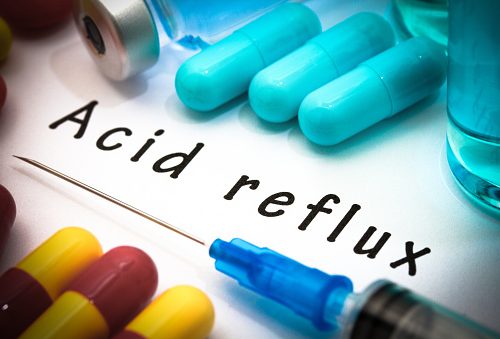 Burning pain in the chest is experienced by many people every day, and while thoughts of heart-related diseases pop into mind, the most common cause of this phenomenon is heartburn or acid reflux. Perhaps a poor choice of name, heartburn is the burning sensation that is felt just behind the breastbone near the location of the heart. This condition affects more than 20 percent of the U.S. population, with a large portion of people affected not being relieved by common treatments. However, this may soon change, as researchers at the University of Michigan have identified a pathway in the cells of the stomach lining that aid in the treatment of this discomforting disease.

Heartburn occurs when stomach acid backs up or refluxes into the esophagus. The lower esophageal sphincter—the opening at the end of the esophagus leading to the stomach—is the cause, as it is the only line of defense for blocking the flow of gastric acid into the esophagus and up towards the mouth. This can occur in situations where the lower esophageal sphincter relaxes abnormally or weakens, giving the opportunity for acid to make its way up, especially when bent over or lying down. Having heartburn for long periods of time can lead to a condition called gastroesophageal reflux disease and even cancer of the esophagus in some cases. Heartburn can occur due to various triggers, which may include:

Treatment for this condition typically involves neutralizing or inhibiting stomach acid and is commonly found for purchase at a local pharmacy. However, these medications are not effective for a good chunk of heartburn suffers, according to the International Foundation for Functional Gastrointestinal Disorders. A new protein being studied by lead researcher Haoxing Xu, a professor of molecular, cellular, and developmental biology at the University of Michigan could potentially relieve this underserved population of heartburn suffers.

While the trial is still in its early phases, Xu and his colleagues used genetically modified mice to produce stomach acid through normal pathways. The team then used a high-throughput screening to find small molecules that would activate or inhibit channels found on stomach cells that produce acid. They found that interfering with a protein called TRPLM1 affects how the stomach produces acid.

“We don’t know whether we might be able to provide a new generation of antacid drug, but clearly there is some problem if there are 20 percent of people who are resistant to older versions of these medications. For them, this pathway could be an option,” Xu said.

Foods that won’t cause heartburn: What to eat and avoid