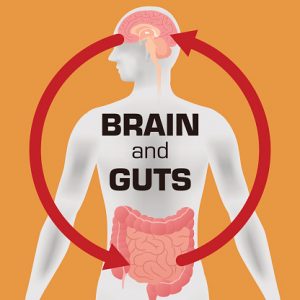 Just go with your gut… What does your gut feeling tell you?… Do you have the guts to do it?… In all these cases, when we mention “guts” we usually imply intuition or, as in the latter example, courage. When we’re making a cool-headed decision, we’re using our logic and reason—in other words, our brain is at work. But we also listen to our so-called inner voice, our actions are often informed by our feelings or emotions, or even some sort of a sixth sense. Where does this sixth sense come from? Hint: It is coming from the brain, but not the one you’re thinking about.

When you’re stuck at the crossroads of decision-making and decide to go with your “gut feeling,” or when you get “butterflies in the stomach” in the anticipation of an important event, it’s your little brain in action: the brain in the gut. Officially termed the enteric nervous system (ENS), it is hidden in the walls of the digestive system and is composed of two thin layers of over 100 million nerve cells lining the gastrointestinal tract from the esophagus to the rectum.

Of course, the ENS is not involved in complex cognitive processes that take place in our master brain. Its primary function is digestion control, from swallowing food to releasing digestive enzymes to managing the flow of blood to enable nutrient absorption and waste removal. Nevertheless, there is a lot of communication going on between the little brain in the gut and the big brain in the head, and it has a profound effect on digestion, mood, and even thoughts.

Mental health issues and digestive disorders often go hand in hand. A conservative take on the brain-gut connection viewed anxiety and depression as triggers of gastrointestinal conditions like irritable bowel syndrome (IBS), but recent research on the subject claims that the connection between the two brains is more complex and some of the cause-and-effect relationships may actually be working in reverse. Recent studies on the enteric nervous system show that irritation in the digestive system may send signals to the central nervous system, triggering emotional symptoms. In other words, mental health issues experienced by people with IBS and functional bowel problems like constipation, diarrhea, bloating, pain, and upset stomach may actually be caused by the little brain in the gut.

This newly established connection between the brain and the gut sheds new light on the effectiveness of antidepressants, cognitive behavioral therapy, and medical hypnotherapy in patients with IBS and bowel disorders.

“Our brains ‘talk’ to each other, so therapies that help one may help the other,” explained Dr. Jay Pasricha, director of the Johns Hopkins Center for Neurogastroenterology. “In a way, gastroenterologists… are like counselors looking for ways to soothe the second brain.”

As an IBS patient, for example, you can get a prescription of antidepressants for your condition because the medication can improve symptoms by calming down nerve cells in the gut. Even cognitive behavioral therapy can be helpful in mediating the communication between the two brains.

While this is a new area of research and there’s a lot more to be explored, the brain-gut connection definitely opens up new venues for treating digestive disorders. Another interesting connection worth investigating is the impact of the digestive system on metabolism, which involves interactions between nerve signals, hormones produced in the gut, and gut microbiota.