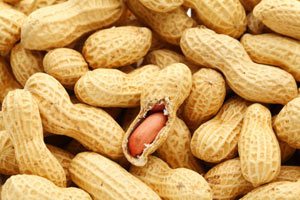 There are many superfoods you can enjoy if you want to protect your heart. From salmon, to blueberries, to even a glass of wine, these foods all contain the nutrients your heart needs to keep beating strong.

There’s now a new food on the radar for healthy eating that’s great for your heart. You may have avoided them up until now because you thought they were too fatty, but in fact nuts offer many benefits for your vital organ. You may already know the perks of eating almonds, walnuts and pine nuts, but the nut that’s getting attention, when it comes to your heart, is the humble peanut, according to new research.

A recent study conducted by an international team of researchers – and published online in JAMA Internal Medicine – revealed that in more than 200,000 people from Savannah to Shanghai, those who regularly ate peanuts and other nuts were far less likely to die of heart disease as opposed to those who hardly snacked on the nuts at all.

The JAMA Internal Medicine study examined nut and peanut consumption in two large groups of people from different regions, races, ethnicities and economic backgrounds. Among them were 72,000 American participants, who were between the ages of 40 and 79, and lived in 12 southern states. Roughly two-thirds were African American.

In order to record nut and peanut consumption, researchers used surveys and followed the two groups for several years, keeping track of the participants who died and noting the causes of their death.

In the U.S. southern states group, for instance, those who regularly ate peanuts were more than 20 percent less likely to have died of any cause over five years, researchers found. For all the groups, they accounted for unhealthy influences like smoking, high blood pressure, obesity and diabetes, which were common in the southern states group.

This only adds to the existing evidence provided by two Harvard-led investigations: The Nurses’ Health Study and the Harvard Professionals Follow-up Study. But participants in the previous Harvard studies were mostly Caucasian health professionals with higher education and incomes than most in the JAMA Internal Medicine study.

What’s more, scientists in the Harvard study couldn’t say for sure if the health improvements were linked to participants’ lifestyles or genes, as opposed to the food that was eaten. So seeing the same health benefit in such a mix of participants in this most recent study has been reassuring to scientists, to say the least.

Of course, the latest research is merely observational. As a result, we can’t be completely certain that nuts are great for your heart, but they can contribute to healthy eating. The positives of nuts, and peanuts in particular, are now backed by pretty compelling evidence.

It’s amazing that the health benefits of nuts seem to hold up across racial and economic lines, which often influence healthy eating and good heart health. For now, peanuts appear to be just as effective in preventing heart disease as other kinds of nuts.

So unless you have an allergy which prevents you from enjoying peanuts, try grabbing a handful every day. Choose the kind without added salts or flavorings – and the effort to eat the peanuts still in their shell will help keep you on track for portion control.

11 foods for a healthy heart

It’s important to have a diet filled with healthy foods and steer clear of the unhealthy ones. But it’s not as easy as it s it sounds. Everybody has a different opinion of what is healthy and what is not. And the glut of information available only makes things that much more confusing. Rather than give you a long list of heart healthy foods and their heart health benefits, I’ll give you a broad range of foods that you should include in your diet.

Give your heart health some attention! The heart is like your engine room, pumping nutrient-and-oxygen-rich blood throughout the body and beating 100,000 times a day. That’s almost 40 million times a year. So if you don’t treat your heart right, with daily activity, good food and exercise – and natural heart health supplements – you could be setting yourself up for trouble.

Natural remedies for a healthy heart

Preventing heart diseases should be America’s top concern when it comes to our health. That doesn’t mean turning to medication for a magic fix, but looking at natural remedies for a healthy heart. And that comes down to lifestyle, making good choices and developing the right habits…..read more