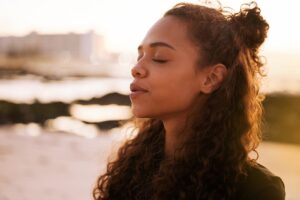 Meditation and mindfulness have been used for centuries to help control pain, but exactly how it works has been a mystery. A new study may explain how these ancient practices may alter brain function to relieve pain.

The study used MRI scans to learn that mindfulness and meditation can interrupt communication between brain areas that process pain and the neural network that produces a person’s sense of self.

Essentially, the meditating person feels less ownership of pain sensations that move from the body to the brain. As a result, pain is diminished.

And it’s not that the pain is completely gone; it is just experienced differently. It seems like the meditation causes the pain to be less bothersome; it is no longer “pain.” It just “is.”

Researchers taught meditation to 20 people through four separate 20-minute mindfulness training sessions, while another 20 people listened to a book on tape for the same period. They served as the control group.

Participants were then placed in an MRI scanner with a plate on the back of their leg to cause pain. It got hot but did not cause a burn. They got the hot plate for ten episodes of 12 seconds on and 12 seconds off.

Each participant reported their pain level during each brain scan session.

The interesting part was what the MRIs revealed.

Meditation or mindfulness may help reduce the communication between these two areas, which results in some pain relief.

So, it could be all about mind over matter. Becoming proficient at mindfulness or meditation may help reduce pain and allow you to get more out of life.