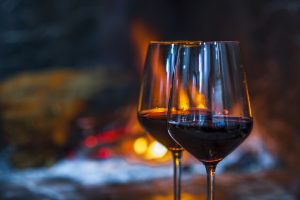 A study is showing that a little red wine may go a long way in helping to prevent type-2 diabetes and control blood sugar.

But the timing may play a crucial role.

The new study suggests that a little red wine with meals may lower the risk of blood sugar disease. And when they say a little, they really mean it.

The benefit seemed to arise when women drank about a half-ounce of wine and men drank one ounce and only when served with a meal. For reference, a standard “drink” of wine is 5 ounces.

Of course, plenty of existing research suggests moderate drinking can be safe and produce some benefits, particularly red wine. In moderate amounts, it is associated with improved cardiovascular health, for example.

To arrive at their conclusion, the research team collected data from more than 312,000 drinkers who were part of the UK Biobank. At the beginning of the study, none had diabetes or heart disease.

During a roughly 11-year follow-up, about 8,600 participants developed type-2 diabetes. Those who had it with meals had a 14% lower risk of getting it than those who drank without eating.

The most significant benefit was seen in those who drank wine with meals and not other alcoholic drinks. Beer and liquor were actually linked with a higher risk for type-2 diabetes.

Red wine, of course, should not be your primary focus if you’re concerned about blood sugar. Instead, focus on your overall diet, limiting sugar intake, and consuming unprocessed foods. Exercise is also a great way to manage blood sugar.

Drinking in moderation, for most, is fine. Data exists to show both benefits and harms, but as long as you remain in the standard one-two drinks per day zone, you are unlikely to pose much of a threat to your health.

So drink safely with meals, and maybe you’ll get a little boost in blood sugar health.