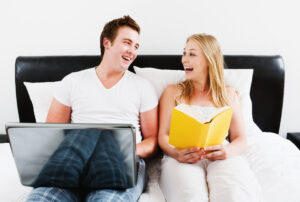 If you share a bed, you know it can be nice to have the whole thing to yourself occasionally. You can spread out, roll around, and discover some new space.

But overall, you’re probably sleeping better when your partner is in bed with you.

At least that’s the result of a new study published in the journal Sleep.

The study suggested that adults who share their bed with a partner have less severe insomnia, less fatigue, and sleep longer every night. They also report greater satisfaction in their lives, and lower levels of stress, depression, and anxiety.

Surprisingly, this was true even if partners snored and rolled round at night.

Researchers learned that people who slept with an adult partner stayed asleep longer and had a lower risk of sleep apnea. But if they slept in the same bed as their child, they were far more likely to have sleep problems.

The findings are interesting because they run contrary to studies conducted in lab settings, which suggested people who slept together tended to have more shallow sleep and that movement led to arousal in the brain.

It’s hard to explain why people sleep better next to a partner than they do alone. But there are theories. Some believe that it may have something to do with safety or socialization.

It could be that through much of history, for example, people slept in groups around a fire. It could simply be that it makes people feel safer.

Of course, it could also be that people who are more anxious or depressed tend to sleep alone because of those challenges,

It will also vary by individual. If a person’s partner causes them to feel stress or uncomfortable, they may not sleep as well as someone who’s put at ease by their partner.

In any event, if you’ve been sleeping separate from your partner, maybe try getting back into bed together. It could have some benefit.