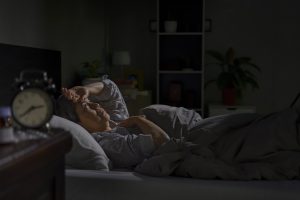 A new study has found a relationship between how walking patterns can be affected by lack of sleep. More importantly, the research found that even a few extra hours on weekends could help reduce fatigue-induced clumsiness.

Previous research has shown how sleep can affect cognitive tasks, such as holding a conversation, solving math problems, and reading. However, less research has explored how sleep can influence the way we walk or carry out activities that are categorized as less mentally taxing.

The new study from researchers at MIT and the University of Sao Paulo in Brazil has found that the amount of sleep we get can control stride or gait. Using student volunteers, the team found that the less sleep students received, the less control they had when walking. For students who pulled all-nighters before the test, their gait control was reduced even further. All students were tested for their walking abilities on a treadmill.

They noted that students who did not stay up all night before the test but generally had less sleep during the week before and those who slept in on weekends performed better than those who didn’t.

“Scientifically, it wasn’t clear that almost automatic activities like walking would be influenced by lack of sleep,” says Hermano Krebs, a principal research scientist in MIT’s Department of Mechanical Engineering. “We also find that compensating for sleep could be an important strategy. For instance, for those who are chronically sleep-deprived, like shift workers, clinicians, and some military personnel, if they build in regular sleep compensation, they might have better control over their gait.”

The Act of Walking

Walking has always been seen as an entirely automatic process involving very little conscious, cognitive control. However, this study shows new insight into walking. This team suggests that walking appears to be an automated process governed mainly by spinal activity rather than cognitive processes involving the brain.

Krebs and his team have been able to show that the act of walking is slightly more involved than once thought. Over the past decade, they have produced research material that studied gait control and the mechanics of walking to help offer treatments for patients who have suffered strokes or other motion-limiting conditions.

Overall, this study confirmed that gait is not an automatic process and can be affected by sleep deprivation. Everyone should be getting 8 hours of sleep every night, and for those who are unable to get this sleep, the study suggests they should compensate as much and as regularly as possible. Those with little sleep must also be more careful to avoid injury through clumsiness when walking.