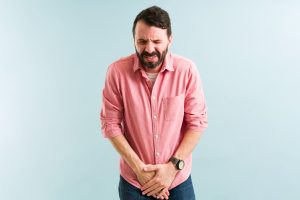 Men bothered by a frequent urge to urinate, whether day or night, might have more than some irritation to deal with. A new study suggests it could indicate early death.

A research team looked at how men’s lower urinary tract symptoms, or LUTS, could be a risk factor for death. They learned that urinary incontinence could be a marker of more severe health issues.

This study marks the first time that such links have been established.

LUTS is defined as any disorder that affects urinary storage, including excess urine production, incomplete bladder emptying, muscular disorders in the bladder, and benign prostate obstruction.

It’s possible that these urinary dysfunctions are caused by a variety of medical conditions, including heart disease or neurological conditions, diabetes, sleep disorders, mobility issues, Parkinson’s, dementia, stroke, or MS.

The study found that men who had moderate to severe bladder-emptying symptoms (like hesitancy, a weak stream, or straining) had a 20 percent increased risk of death during the 24-year follow-up period. Those that had “storage” symptoms like frequent daytime urination, incontinence, or nocturia, had a 40 percent risk of death.

Even those with mild symptoms of daytime frequency had a risk of 30 percent. Nocturia issues bumped it to 50 percent.

So, what does all this mean for you? If you’re struggling with urination – whether you have to go too frequently or are having trouble going  –  you may want to see a doctor.

For example, if you find yourself having to pee frequently after drinking two cups of coffee, but things taper off during the day and night, you can probably chalk it up to the coffee; it’s known to boost urination.

However, suppose you’re making repeated trips to the bathroom during the day because you can’t empty your bladder, or you’re waking at night. In that case, it could be a symptom of an undiagnosed health condition that may be easy to treat if spotted early enough.