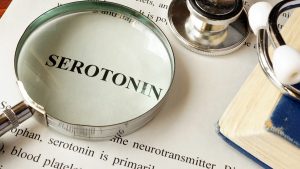 Everyone likes to feel good, and the hormone serotonin generally brings on that feeling. High levels of serotonin, therefore, may always seem like a good thing. After all, it would mean you’re constantly feeling pretty good.

But new data is revealing that feeling good in your brain might not always be great for your gut, particularly if you’ve got Crohn’s disease.

The study suggests that increased serotonin levels may prevent the gut from cleaning out damaged or dying cells via autophagy (a natural house cleaning process), which can change the composition of gut bacteria to result in increased inflammation and disease flare-ups.

But how can a neurotransmitter that helps regulate mental health cause problems in the gut? Well, believe it or not, experts suggest about 90% of the body’s serotonin is produced in the gut.

That’s why the gut is often referred to as “the second brain.”

The small study noted that increases in serotonin receptors in the colon inhibited autophagy and altered the gut microbial population. The altered population increased inflammation and led to more severe symptoms.

Previous research has found that people with Crohn’s tend to have elevated levels of serotonin.

Of course, there are some Crohn’s management techniques that can be effective. These include paying attention to triggers, and perhaps more importantly, finding ways to manage stress. Stress is recognized as a significant influencer of Crohn’s flare-ups.

The results of this study may help pave the way for a medically-targeted treatment to help Crohn’s patients, or which none currently exist. It would look to block serotonin signalling to promote better function and avoid potentially harmful microbial changes