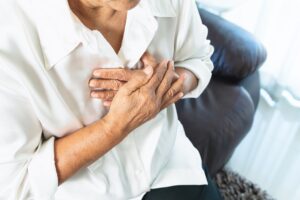 People might not like the body fat that they can see, but the fat they can’t see is actually much more dangerous to their overall health. Visceral fat, which is the stuff stored deep in the belly, wraps around your organs, and it’s nearly impossible to know how much you have.

One of the areas where visceral fat can grow is around the liver. In fact, fat can actually grow on the liver, which inhibits its ability to function properly. If left unchecked, liver fat can lead to fatal liver disease.

About 30 percent of adults worldwide have a buildup of fat around their liver, a condition called non-alcoholic fatty liver disease, or NAFLD.

Now a team of international researchers has linked NAFLD to a higher risk for heart failure.

NAFLD rates have been skyrocketing in recent years as more people become overweight and obese.

The study involved a review of 11 long-term studies from five countries (United States, United Kingdom, South Korea, Sweden, and Finland) that were published through March of this year.

Researchers looked at links between liver disease and heart failure in more than 11 million middle-aged adults. Half of the participants were women, with an average age of 55 and a BMI of 26, which is considered overweight but not obese.

They found that about 26 percent, or 2.9 million study participants, already had NAFLD. During the 10-yeat monitoring period, more than 97,000 were diagnosed with heart failure. Heart failure is a condition where the heart cannot pump enough blood around the body.

NAFLD was associated with a 50 percent higher risk of developing heart failure over the next decade and also seemed to parallel the severity of liver disease.

To limit your risk of NAFLD and heart failure, try to avoid intake of sugary and processed foods, replacing them with more fruit and vegetables. Increasing activity and maintaining a healthy weight is also likely to help.