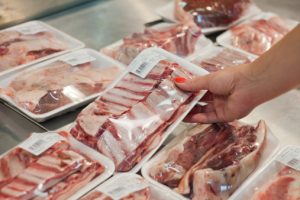 Now there’s even more reason to visit the farmer’s market to stock your fridge.

If you regularly eat packaged or processed foods you may be exposing yourself to harmful, cancer-causing toxins.

New research published in the February 2014 edition of the Journal of Epidemiology and Community Health showed that many of the synthetic chemicals that are used in packaging and storing foods can leach into the food, potentially having a negative impact on your health long-term.

Food contact materials (FCMs) are substances, commonly plastic or synthetic material, that are used in the packaging, storing and processing of foods or substances found in the food preparation equipment. The coating and laminate on beverage containers or the closures of glass jars are examples of where FCMs are found. Many of the chemical toxins found in FCMs are regulated; however, individuals who often eat processed foods are chronically exposed to low levels of these toxins throughout their lives.

The problem is that there has been a limited amount of research that has investigated the long-term effect of these FCM toxins so individuals may be putting their health at risk, unknowingly.

The authors of the study, U.S.-based scientists from Environmental Health Sciences in Virginia and Carnegie Mellon University in Pittsburg, along with researchers in Switzerland and Spain, suggest three major reasons why long-term exposure to FCM toxins is cause for concern.

The first reason is that there are certain known cancer-causing toxins, including formaldehyde, that are used legally in FCMs. For example, plastic bottles commonly contain low levels of formaldehyde. Chronic exposure to toxins such as formaldehyde may increase an individual’s lifetime risk of cancer.

The second reason is that FCMs may contain toxins that disrupt hormone production. These chemicals include bisphenol A, tributyltin, triclosan and phthalates among others.  The authors point out that the effect of these substances currently is up for debate; however, individuals are often chronically exposed to these toxins without being aware of it.

The third reason is that FCMs often contain over 4,000 known toxins.  The authors note that routine toxicology analysis overlooks potential cellular changes that are caused by FCMs which casts doubt on the effectiveness of chemical regulation testing procedures.

The authors state that while it will be difficult to find a potential cause and effect relationship of lifelong exposure to FCMs, it is important to conduct population-based assessments as well as bio-monitoring. This will help to identify links between FCMs and chronic health conditions, such as cancer, obesity, diabetes, as well as neurological and inflammatory diseases.

Since people around the world are exposed to FCMs on a daily basis, it is important that research focuses on establishing links in a reliable and rapid manner to help reduce the burden placed on society by chronic health conditions that often result in disability and sometimes even death.