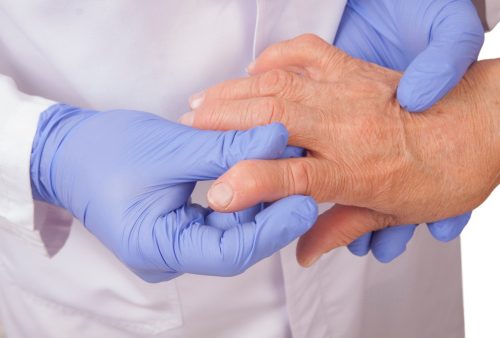 Rheumatoid arthritis is an autoimmune chronic inflammatory disorder that causes pain and stiffness in the joints and can also affect a wide variety of bodily systems. Despite all of its negative effects on the body, rheumatoid arthritis can be difficult to diagnose in its early stages.

However, a team of researchers from the University of Twente and various European partners has designed a device that shows the difference between healthy fingers and arthritic fingers. They believe that it will aid physicians to diagnose the degree of inflammation in joints.

Rheumatoid arthritis is a chronic inflammatory disorder that can affect more than just the joints. It causes the joints to become inflamed, leading to pain, swelling, stiffness, and fatigue. In some people, the condition can also damage a wide variety of bodily systems including the skin, eyes, lungs, heart, and blood vessels.

It is considered an autoimmune disorder, which means that the body’s own immune system mistakenly attacks its own body’s tissues. This autoimmune attack affects the lining of the joints, causing painful swelling and eventual bone erosion and joint deformity.

However, CRP and ESR are considered non-specific markers, as many unrelated processes can cause these factors to increase. Therefore, CRP and ESR often support the diagnosis of rheumatoid arthritis but usually, additional testing is needed.

The researcher’s new device uses a combination of ultrasound and photoacoustic medical imaging techniques. It allows physicians to take a look at superficial areas of the body, offering detailed information on the degree of inflammation at that particular site. This allows them to clearly differentiate arthritic fingers from healthy fingers.

Photoacoustics uses short laser pulses emitted on the area of choice. When these pulses hit a blood vessel, a small increase in pressure moves throughout the body like a sound wave, which can be measured. Ultrasound imaging uses sound waves transmitted into the body, bouncing off various tissue, producing an image.

These two medical imaging techniques were found to complement each other well, generating more function information when used together than apart.

This new device has even helped to determine the severity of burns, skin cancer, and hardening of the arteries.

Studies evaluating the effectiveness of the device have successfully demonstrated that it can be used to diagnose inflamed joints. The researchers expect that in the future, physicians will rely on this objective test as opposed to relying on human observation for rheumatoid arthritis diagnosis.

Use of pedometers found to decrease fatigue in rheumatoid arthritis patients