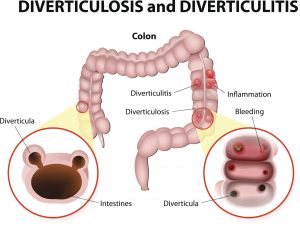 Diverticulosis is a condition where pouches develop along the intestines, colon, and even stomach. The risk of diverticulitis increases with age, with over 50 percent of patients being over 60. Generally, the pouches do not cause any issues. The inflammation of the pouches is what is known as   diverticulitis. The condition is accompanied by the abdominal pain and infection.

Spiegel added, “A major surprise in our study was that diverticulitis patients not only developed IBS at a higher rate than the controls, but they also developed mood disorders like depression and anxiety at a higher rate. Because IBS and mood disorders often go hand in hand, this suggests that acute diverticulitis might even set off a process leading to long-standing changes in the brain-gut axis.”

Discovering PDV-IBS could mean better treatment for patients when they experience symptoms after a bout of diverticulitis.

“Patients often report ongoing IBS symptoms after the diverticulitis has long passed, and this study supports their beliefs and introduces a new diagnosis. If doctors recognize this, they may take the symptoms more seriously and manage them actively, just as they can manage IBS actively with various new drugs on the market and currently in development,” said Spiegel.

The study looked at over 1,000 patient records of patients who experienced diverticulitis and those who had not. Patients were paired with same-age, sex and comorbidities controls.

Spiegel explained, “This study expands our understanding a little bit about what might cause IBS. It’s such a common condition and there may be different flavors. We’ve now added a new flavor to the menu, a new risk factor for developing IBS. By learning more, we might be able to expand the therapies we can use on these patients.”

Treatment of diverticulitis involves consuming a high-fiber diet to minimize symptoms, along with taking painkillers to reduce pain. For mild cases, diverticulitis can be treated at home with antibiotics, but if it is more severe, it may warrant hospitalization, which may involve surgery to remove the affected part of the intestine.

The cause of IBS is still unknown, so treatment can be hit or miss. Treatment can involve eliminating certain trigger foods which have been linked to IBS flare-ups from your diet. Other treatments for IBS include fiber supplements, antidiarrheal medications, antispasmodic medications, antidepressant medications, antibiotics, and even counseling to ease stress and treat any depression that can aggravate IBS.

Due to the fact that the cause of IBS is unknown, prevention methods can be quite vague. Some prophylactic practices for IBS include counseling, biofeedback, progressive relaxation exercises, deep breathing, mindfulness training, and taking time out of your day to focus on yourself and perform activities that you enjoy.