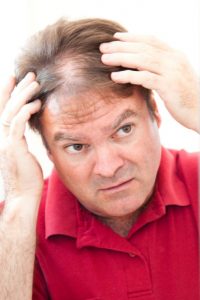 Is your hair thinning, looking like there’s less and less of it? With full vibrant hair a sign of good health and attractiveness, thin lackluster hair can make you feel self-conscious about your appearance.

We don’t all have to have the Robert Redford or Brooke Shields locks of beauty, but something to really run our hands through would be nice.

Hair loss and a receding hairline is not just a concern for men. Both men and women experience hair loss and it can have a huge impact on self-esteem. The trouble is, hair loss can be really emotional and difficult to treat. Scientists now say that stem cells could be the answer.

Researchers at the University of Pennsylvania’s Perelman School of Medicine report that they have transformed adult human cells into stem cells to regenerate the cells found in hair follicles. Stem cells as a means to re-grow hair follicles are not an unknown concept; however, until now, scientists have not been able to produce enough of the cells to conquer baldness. This is the first time a research team has managed to achieve such a result, bringing new hope to those looking for hair help.

The research team started out with human skin cells known as “dermal fibroblasts.” They added three genes and converted the cells into what are commonly referred to as “induced pluripotent” (iPSCs) stem cells. The iPSCs are adult stem cells that have been genetically reprogrammed into an embryonic cell-like state.

The scientists bioengineered the cells into epithelial stem cells that are normally found at the bulge of hair follicles. By controlling the timing of the cells’ growth, the researchers were able to force the iPSCs to produce large numbers of epithelial cells.

Over an 18-day period, 25 percent of the “induced pluripotent” stem cells were converted into epithelial stem cells. When the scientists mixed the cells with mouse dermal cells and grafted them onto the skin of mice, they were able to produce functioning human layers of skin cells and follicles that were similar to human hair.

RELATED READING: 7 Surprising Reasons You May Be Losing Hair, And What To Do About It

From Laboratory To Market

Over 30 percent of men in America are affected by male pattern baldness. Women also experience hair loss at an alarming rate. While the University of Pennsylvania’s promising new cells are not ready to be used in humans, more research and development could see them used in hair regeneration. Researchers say the cells also could be used to heal certain types of wounds.

When humans experience hair loss, they actually lose two different kinds of cells, the epithelial part of the hair follicle and the dermal papillae cells. The study at the University of Pennsylvania solved one part of the problem, the epithelial, but now scientists say they must figure out a way to make new dermal papillae cells. Back to the laboratory!