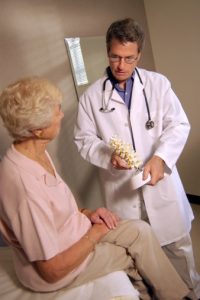 If keeping your bones healthy is one of your health priorities, chances are you have tried many popular treatments to prevent osteoporosis. Most of these treatments utilize vitamins and minerals in tandem with a medication to reduce the risk of fractures.

But what if there was a way to reverse the effects of osteoporosis altogether, and regain strong, healthy bones? There’s a new drug in development to do just that.

Osteoporosis is a condition that weakens your bones, leaving them brittle and prone to fractures.  It can strike men and women at any age, but most common in people over 55. Athletes, because of the strain they put on their body and bones, are also at risk of developing osteoporosis. It’s widespread; some 10 million Americans have been diagnosed with the condition, and 34 million more are at a high risk of developing osteoporosis.

Dr. Michael McClung, founder of the Oregon Osteoporosis Center in Portland and author of a new study, says that most osteoporosis treatments work by slowing the progression of bone loss, but none of them are capable of rebuilding the bone that has already been damaged. McClung has tested a new experimental drug, Romosozumab, that actually re-enables the body to produce new bone. The treatment blocks certain biochemical signals that normally inhibit the production of bone. Great news! This scientific breakthrough could revolutionize the way we deal with osteoporosis.

RELATED READING: Drinking Milk May Not Boost Your Bone Health After All

To explain further, this new treatment uses an antibody to block the function of sclerostin, a protein the body produces to naturally stop bone growth. While a lack of sclerostin can lead to overactive bone growth, in osteoporosis patients it can easily allow the body to re-form any bone that has been lost. Romosozumab binds to the sclerosis to block its signals and allow bone tissue to grow unhindered.

An initial trial of the drug was carried out on monkeys, and proved that the drug had the ability to stimulate bone growth. Following the success of the first stage, a phase 2 clinical trial of Romosozumab was conducted with humans. The trial consisted of close to 400 post-menopausal women, aged 55 to 85 diagnosed with osteopenia, a mild form of osteoporosis. The women were randomly assigned to one of four treatments: a placebo, Romosozumab and two current osteoporosis drugs.

The results of the human trial show that Romosozumab increased bone mineral density in the spine by approximately 11.3 percent during the study period. Compare this to 7.1 and 4.1 percent bone mineral density increases in the two current treatments. The new drug is more effective than other osteoporosis treatments with regard to rebuilding damaged bone.

The new treatment with Romosozumab , unlike most others, does not appear to have any negative side effects at all. Experts say the treatment will be self-regulating. As the bone density increases, and the bones become able to carry more load, the signal blocking effect of Romosozumab will begin to taper off, leaving the sclerosis to regulate bone growth as normal.

However, the drug is still several years away from a full market release. Researchers now have to prove that Romosozumab is able to prevent against the bone fractures caused by osteoporosis.

The drug will be game-changing: Rather than leaving patients on the defense, this treatment puts them on the offensive against osteoporosis and bone degradation, giving them a great opportunity to be proactive against bone deterioration.