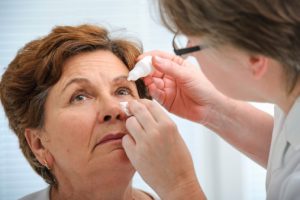 A new chemical has been found that, when added to eye drops, can help clear up cataracts. Cataracts are the leading cause of blindness, and the teams from UC San Francisco (UCSF), the University of Michigan (U-M), and Washington University in St. Louis (WUSTL) uncovered this new form of treatment during a recent study.

The World Health Organization has deemed cataracts a “priority eye disease,” as it affects nearly 20 million people worldwide. Cataracts can be removed through surgery, but that process can be costly.

The new chemical is the first soluble version that can be added to eye drops as an effective means of treating cataracts.

Cataracts mainly arise due to aging. They are caused by the clumping together of proteins – crystallins – similar to Alzheimer’s or Parkinson’s disease. Crystallins are part of fiber cells that make up the eye’s lens. Co-senior author Jason Gestwicki, Ph.D., said, “Shortly after you’re born, all the fiber cells in the eye lose the ability to make new proteins, or to discard old proteins. So the crystallins you have in your eye as an adult are the same as those you’re born with.”

For proper function crystallins must maintain transparency of fiber cells and flexibility. This is possibly due to proteins known as chaperones, which Dr. Gestwicki describes, “[act] kind of like antifreeze, keeping crystallins soluble in a delicate equilibrium that’s in place for decades and decades.”

The chemical found to be successful is known as lanosterol, a naturally occurring steroid, and previous research showed it was able to reverse cataracts. Unfortunately, lanosterol is not soluble, so through further investigation the team uncovered what they called compound 29, which was soluble.

Compound 29 was put into eye drops and given to mice who were modified to develop cataracts. The researchers found that the drops partially restored transparency affected by cataracts.

Dr. Gestwicki believes that compound 29 can have broader implications outside of just helping cataracts. He concluded, “If you look at an electron micrograph at the protein aggregates that cause cataracts, you’d be hard-pressed to tell them apart from those that cause Alzheimer’s, Parkinson’s, or Huntington’s diseases. By studying cataracts we’ve been able to benchmark our technologies and to show by proof-of-concept that these technologies could also be used in nervous system diseases, to lead us all the way from the first idea to a drug we can test in clinical trials.”