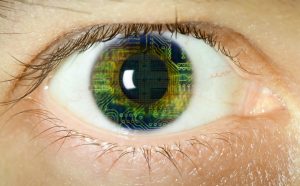 We live in a high-tech world and advances in the health care field are changing lives, I’m proud to say. Scientists have developed advanced prosthetic arms and legs to give new hope to those with limited mobility. “Bionic” eyes may be next for those with vision trouble.

A new treatment is in the testing stages that could restore vision in that Six Million Dollar Man way, and offer promise to others with severe vision impairments.

One of the patients undergoing treatment is Roger Pontz of Michigan. He has been nearly blind for years because of retinitis pigmentosa, a degenerative eye disease that causes slow, but progressive loss of vision. The retina is the tissue which lines the inside of the eye and sends visual images to the brain. In retinitis pigmentosa, there is gradual destruction of some of the light sensing cells in the retina.

It started at a young age for Roger, gradually deteriorating, but he’s now catching glimpses of his family thanks to a surgically implanted “bionic eye.”

Related Reading: Another good reason to raise a glass of red wine

The bionic eye is known as the Argus II Retinal Prosthesis System, developed by Second Sight Medical Products Inc. in California. Pontz has an artificial implant in his left eye and a pair of glasses that contains a small video camera and a transmitter.

How the bionic eye works is futuristic, to say the least. The camera captures images that are a collection of light and dark pixels. Those images are transmitted to electrodes on the retina via a radio transmitter in the eyeglasses as well as in a receiver under the patient’s skin. The receiver is attached by wires to electrodes implanted in the back of the affected eye.

During this process, the pixels collected by the camera are translated by the device’s video processor into electrical pulses that represent “light” or “dark” and stimulate the eye’s electrode implant. In effect, this acts to replace the photoreceptors destroyed by retinitis pigmentosa. The remaining healthy cells on the retina are stimulated by the electrodes and the brain then works to makes sense of the images.

In Pontz’s case, he can identify his cat well enough to grab it, AP reported. Second Sight is now working to improve the technology, and facial recognition may one day be possible.

Related Reading: Eye spy: What your eyes may be telling you

Pontz’s surgery was performed at the University of Michigan Kellogg Eye Center in Ann Arbor, one of 12 sites in the United States to offer the treatment. The Kellogg center is set for a fifth surgery this May.

The treatment is far-reaching. About 10 percent of the 100,000 people in the U.S. who have retinitis pigmentosa have vision low enough for the bionic eye to be useful, Dr. Brian Mech of Second Sight told AP. Of those, about 7,500 would be considered candidates for the surgery.

Are you at risk for this disease? The cause of retinitis pigmentosa has not been clearly identified. Canada’s CNIB, a non-profit rehabilitation agency for people who are blind, visually impaired and deafblind, says about 50 percent of cases are sporadic with the remaining cases being hereditary.

The first symptoms usually start during young adulthood: Most commonly, night blindness (where adjusting to the dark happens very slowly) and the loss of side vision, leaving a person with only central vision (as if looking down a tunnel).

About 1.5 million people globally have the condition, hence the significance of the bionic eye treatment. And to all those with deteriorating vision and other eye diseases, there’s hope for life-changing intervention. Here’s to better living through science!