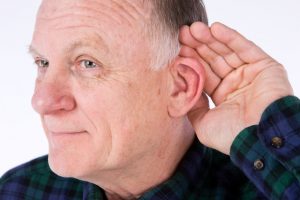 One-third of seniors between 65 to 74, and nearly half of those older than 75, have hearing loss, this according to the National Institute on Deafness and Other Communication Disorders.

Age-related hearing loss has often been associated with a death in sensory cells, but new research has uncovered another culprit to this aging condition. Researchers at John Hopkins studied hearing loss in mice, in particular sensory cells and nerve cells within aging mice ears.

“The nerve cells that connect to the sensory cells of the inner ear are known to inhibit hearing, and although it’s not yet clear whether that’s their function in older mice, it’s quite likely,” said Paul Fuchs, a professor and surgeon at John Hopkins.

Within the ear there are coiled rows of sensory cells. These cells are responsible for turning sound waves into electrical signals that travels to the brain indicating what to hear. These cells are located in the inner and outer ear. The cells in the outer ear are responsible for amplifying sound and the ones in the inner ear turn them into signals which travel through the nerves. When changes occur to the cells in the outer ear, it can relate to changes in the inner ear.

Previously, it was believed inner hair cells decrease nerve cells which go out but outer nerve cells increased. The current research, to test this, recorded electrical signals from the inner ear of aging mice.

Observations revealed outer nerve cells did increase and the poorer the hearing was the more outer nerve activity occurred.

“These nerve cell connections seem to be reverting back to the way they worked during early development before the animals’ sense of hearing was operating,” said Fuchs. “We don’t know why the new connections form, but it might be as simple as a lack of competition for space once the outgoing nerve cells have retracted.”

Although the study was conducted on mice, if researchers can witness the same results in human they feel they can be closer in preventing age-related hearing loss.

The findings were published in The Journal of Neuroscience.