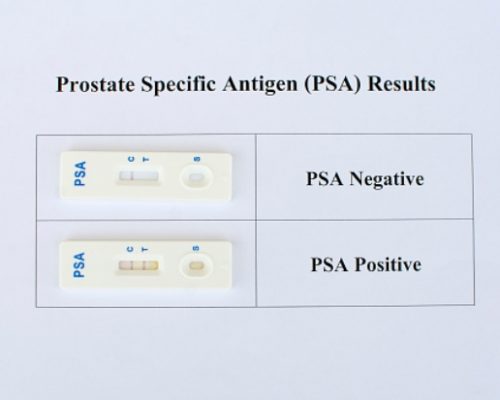 If you’re an older male then your doctor may have discussed with you a prostate-specific antigen (PSA) test. PSA is a protein produced by the prostate and found in the blood. The value of the PSA blood test is that it can offer some important insight into your health, including the possibility of prostate cancer.

10 things you need to know about a PSA test

A low PSA level is good: A result of four nanograms per milliliter of blood or less reveals there is no prostate cancer. On the other hand, higher levels may indicate the possibility of prostate cancer. Unfortunately, a single PSA test often isn’t enough to determine a man’s risk of prostate cancer, so your doctor may repeat it a few times.

There’s a chance of false positives: PSA levels can be influenced by many factors, including infection and ejaculation, so just because PSA levels have been high during one test doesn’t necessarily indicate prostate cancer. As mentioned, for these reasons, the test will have to be repeated.

Risk factors are important: Before recommending a PSA test, your doctor will consider other risk factors for prostate cancer that you may have. These include race, age, and family history. If you do not have any risk factors, your doctor may forego a biopsy.

Biopsies don’t always show cancer: If your PSA test results call for further checkup, your doctor may refer you for a biopsy. Three out of four men with positive PSA test results are cancer-free, based on the subsequent biopsy.

There’s no consensus on when PSA testing should begin: No two doctors are alike when it comes to what age PSA testing should be done. Some doctors suggest the age of 40, while others may hold off until 50. It’s important that doctors consider prostate cancer risk factors when recommending PSA tests to their patients.

Testing affects a man’s psyche: Men have noted experiencing anxiety after results have come in – even if they are found to be cancer-free. In a study tracking a group of men for up to three months after a negative result (meaning, cancer-free), the men still reported being anxious about a cancer diagnosis.
PSA tests may not save lives: A large European study that looked at men who were tested every four years revealed a 20 percent reduction in deaths, compared to those men who were not tested. Yet, another U.S. study found that PSA testing didn’t reduce the risk of mortality at all. On the other hand, since PSA testing began in the U.S. there have been big drops in prostate cancer-related deaths.

The rate of rising PSA is important: Just as it is important to determine the baseline levels of PSA, the rate at which PSA levels rise is another important factor to monitor. If the rate is slow then treatment may not be required, compared to cases where PSA levels are rising at a faster rate.

Although the decision to undergo PSA testing may be daunting, you can get support along with the necessary information from your doctor and through the American Cancer Society.