Home » Health News » Are Neck Ties Dangerous for Your Health? 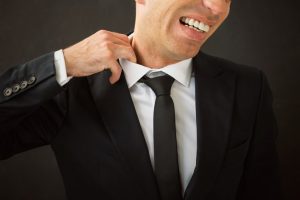 If you’re a man, you’ve probably worn a necktie throughout your life for various occasions. From work attire to evening outings, neckties can be formal or professional. But this piece of clothing, although stylish, may pose a risk to your health.

Research has shown that not only does wearing neck ties cause slight discomfort, but it can reduce blood flow to the brain by 7.5 percent. Symptoms of reduced blood flow don’t appear until about a 10 percent reduction in blood flow.

Previous studies have compared compression of the jugular vein in the neck to reduced blood flow to the brain. The recent study tested whether changes caused by wearing a necktie could lead to blood pressure changes.

The study recruited 30 young men who were split into two groups: Those who wore a necktie and those who did not.

The researchers used MRI scans to determine cerebral blood flow along with testing blood flow in the jugular vein.

The men were first scanned at baseline either wearing an open collar shirt or loosening their tie. The second scan had the men either close their collar or tighten their tie. The third scan was the same as the baseline. Each scan was 15 minutes.

The findings uncovered wearing a Windsor knot tightened to slight discomfort led to a 7.5 percent decrease in cerebral blood flow and 5.7 percent drop in the jugular vein. The men in the control group did not see a reduction in blood flow to the brain.

If blood flow was reduced by 10 percent, then individuals would experience an increase in blood pressure, dizziness, light-headedness, and nausea.

On the other hand, men who wear neckties in combination with other factors such as smoking or being older in age could experience symptoms related to a 7.5 percent reduction in blood flow to the brain. This is because these other factors could raise a person’s risk to the 10 percent blood loss reduction.

Future studies not only need to include more participants and those of a variety of ages but also test necktie wearing duration and different levels of the tightness of the tie.

Although the research isn’t intended to cause fear, it does raise awareness of a slight risk they may pose to male health. But each person is unique and only individual factors will truly determine how a necktie will affect your health.