Home » Brain Function » Myth Busted: No Such Thing as Left-Brained or Right-Brained Thinker 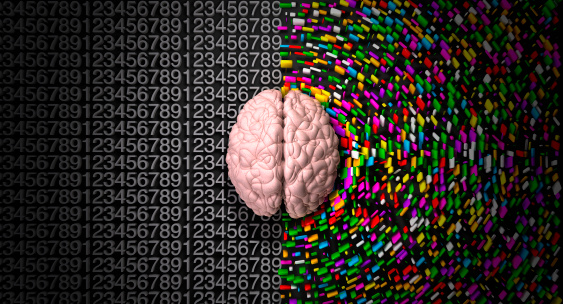 Throughout your life, you’ve probably been labelled as a “left-brained” or “right-brained” thinker depending on your typical thought processes.  If you’re logical, sensible and detail-oriented, you’ve probably been labeled as a “left-brained” thinker. A creative and subjective person would have likely been labeled as a “right-brained” thinker.  Previous research has hinted at the idea that we typically use one side of our brain more often than the other and that this impacts our personality type.  However, recent research from the University of Utah found no evidence to support the idea that some people think more with their left brain, while others think more with their right brain.

The Basics of Brain Lateralization

The human brain is divided by the longitudinal fissure into the left and right hemispheres which are connected by the corpus callosum.  Various tasks that we perform are often associated with one side of the brain.  For example, calculation and fact retrieval are usually associated with the left brain hemisphere.  Language functions such as grammar, vocabulary and literal meaning are also often lateralized to the left brain hemisphere.  However, language functions involving intonation and accentuation are often dominated by right brain hemisphere. Visual and auditory stimuli, spatial perception and artistic ability are represented by both sides, but tend to have right brain hemisphere dominance.  The fact that certain tasks are used in one area of the brain over the other has led to the idea that individuals can preferentially use one side of their brain more than the other, which has given rise to the idea of “left-brained” versus “right-brained” thinkers.


University of Utah Research on the Brain

Researchers evaluated the resting brain scans of 1,011 individuals between the ages of 7 and 29 from the International Neuroimaging Data-Sharing Initiative (INDI).  In order to obtain these brain scans, the participants had lain in a magnetic resonance imaging scanner for 5 to 10 minutes while their resting brain activity was analyzed.  The researchers were then able to link brain activity in one region compared to another.  For the purpose of this study, the researchers divided the brain into 7,000 regions and looked for areas of the brain which were more lateralized. Lateralization of the brain essentially means that there are specific mental processes that are specialized to either the right or left hemisphere of the brain as was described above. The researchers looked for connections and calculated the number of connections that were left-lateralized and right-lateralized. The results found patterns showing that a brain connection may be right- or left-lateralized.  However, no relationship was found that suggests that an individual preferentially uses their left brain or their right brain more often.  The results of this study may change the way people view “left-brained” thinkers versus “right-brained” thinkers.

The researchers do not dismiss the fact that certain processes take place in certain areas of the brain; they do however state that they haven’t found patterns that show that one side of the brain is more connected than the other.  Personality types may not have anything to do with one side of the brain being more connected than the other side.  So the next time someone tells you that you’re a “left-brained” or “right-brained” thinker, you can debunk the myth.