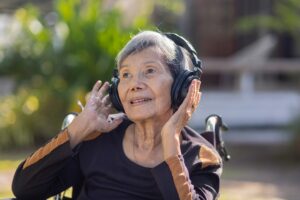 Dementia affects people in different ways, but one common symptom is a decline in social skills, including the ability to communicate verbally. This can make it difficult for people with dementia to connect with loved ones. However, a new study suggests that musical intervention may help improve social skills and connectivity among those with dementia.

The Northwestern Medicine study, in collaboration with the Institute for Therapy through the Arts (ITA), set out to show how a gap in memory can be bridged with a new music intervention. The intervention called “Musical Bridges to Memory” is a live ensemble that plays music from a patient’s youth, such as songs from the musicals “Oklahoma” or “The Sound of Music.”

This performance is meant to create an emotional connection between a patient and their caregiver. This is achieved by allowing them to interact with the music together by singing, dancing, and playing simple instruments.

This study published in Alzheimer’s Disease and Associated Disorders is the first of its kind to target patients with dementia and their caregivers. Most previous studies using music for dementia patients have focused only on the patient.

“Patients were able to connect with partners through music, a connection that was not available to them verbally,” said study author Dr. Borna Bonakdarpour. “The family and friends of people with dementia also are affected by it. It’s painful for them when they can’t connect with a loved one. When language is no longer possible, music gives them a bridge to each other.”

The program followed in the study included 12 sessions over three months, and after all performances, a group conversation followed. Patients were recorded as being more socially engaged, as evidenced by having more eye contact, less distraction, less agitation, and an elevated mood.

In a control group that did not have the music intervention, adults with dementia did not show such changes within the same time frame.

This study gave a chance for caregivers to communicate with their partners through playing, singing, and dancing together. These changes were also noted as transferring to their behavior outside the sessions. It was also stated that the music intervention
reduced neuropsychiatric symptoms such as agitation, anxiety and depression in both patients and caregivers.

The next step in the research is to conduct the study on a larger group of patients.

While some degree of cognitive decline is nearly inevitable as you age, other factors can take a toll on the ability of the brain to function at peak potential. This can affect memory, concentration, and overall brain function.

The Smart Pill can help to enhance cognitive function and memory through 9 ingredients that help to support, nourish, and maximize brain health. These include ginkgo biloba, huperzine A, bacopa extract, rosemary extract, and a B vitamin complex. This unique formula helps to boost circulation, fight free radicals, and provide nutritional support to assist with cognitive function.