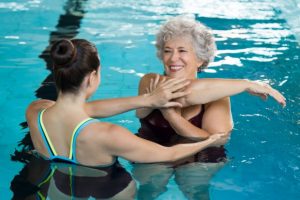 In women with multiple sclerosis (MS), yoga and aquatic exercises help reduce fatigue, depression, and paresthesia. The researchers examined the effects of aquatic exercise and yoga on fatigue and depression among multiple sclerosis female patients. The 54 participants were randomly assigned to either yoga, aquatic exercise, or non-exercise control group, with no changes in their existing immune modulatory therapy. The women also answered questionnaires to measure fatigue, depression, and paresthesia at baseline and again at the end of the eight-week study period.

Compared to the non-exercise control group, those who partook in yoga and aquatic exercise saw great improvements in their fatigue levels, depression, and paresthesia.

The authors wrote, “The pattern of results suggests that for females with MS and treated with standard immune regulatory medication, exercise training programs such as yoga and aquatic exercising positively impact on core symptoms of MS, namely, fatigue, depression, and paresthesia. Exercise training programs should be considered in the future as possible complements to standard treatments.”


How to manage multiple sclerosis fatigue

Fatigue is a common complaint among multiple sclerosis patients, negatively impacting their life. Proper management of MS fatigue is important for improving their quality of life and overall health.

The program is conducted through weekly sessions, facilitated by two healthcare professionals.

FACETS was evaluated and tested by dividing patients into two groups: those who attended FACETS and those who received routine care. The FACETS group had greater improvements in fatigue severity after a four-month follow-up, compared to the routine care group. Overall, the researchers received positive and overwhelming feedback from those in the FACETS group. Not only did the FACETS participants improved their quality of life and but they also said they would recommend it to others as a way to help beat multiple sclerosis fatigue.