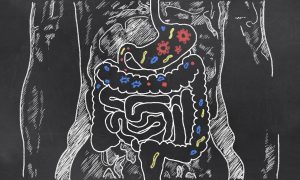 Lead author Professor Helen Tremlett said, “While these findings are preliminary, they are intriguing. We also observed some similarities between our findings and other emerging gut microbiota studies in multiple sclerosis. Whether these indicate a ‘gut signature’ of multiple sclerosis or of broader autoimmune disease remains to be determined. We also found differences in the gut microbiota composition between those children taking a disease-modifying drug for their disease, compared with those who were not. This finding warrants further study.”

The gut-brain connection is growing into a popular area of study. Many studies have found a link between the gut and the brain and have uncovered that changes in the gut could negatively impact the brain. Researchers wanted to determine if the gut-brain connection played a role in multiple sclerosis, and they found that bacteria in the gut may impact the activity of cells in the brain involved in controlling inflammation and neurodegeneration. The researchers used pre-clinical models for multiple sclerosis, along with samples from multiple sclerosis patients, and found that changes in diet and gut flora may influence astrocytes (star-shaped cells in the central nervous system) and neurodegeneration in the brain. The findings could help uncover possible new therapies to treat multiple sclerosis.

Corresponding author and investigator Francisco Quintana said, “For the first time, we’ve been able to identify that food has some sort of remote control over central nervous system inflammation. What we eat influences the ability of bacteria in our gut to produce small molecules, some of which are capable of traveling all the way to the brain. This opens up an area that’s largely been unknown until now: how the gut controls brain inflammation.”

Multiple sclerosis vs. stroke, differences in symptoms, causes and treatments