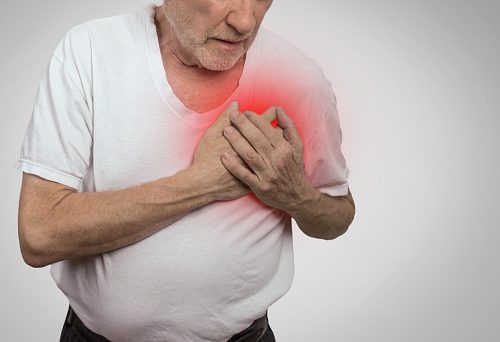 Multifocal atrial tachycardia (MAT) is a heart condition characterized by an irregularly fast heartbeat, otherwise known as arrhythmia. The patient will present with a heartbeat faster than 100 beats per minute (bpm)—in some cases reaching as high as 250 bpm—which is more than twice the normal rate. This is caused by several sites of competing atrial activity or an abnormality in the signals being received from the different areas in the heart.

The prevalence of multifocal atrial tachycardia is dependent on the sex and age of the patient. It occurs more often in males than females and in elderly patients predominantly. An average taken from nine different studies on MAT showed the highest prevalence in patients over the age of 70. Multifocal atrial tachycardia most often occurs in patients with multiple medical issues and appears in only 0.05–0.32 percent of patients in the hospital.

What are the causes and symptoms of multifocal atrial tachycardia?

There are also certain factors that can lead to an increased risk of MAT. These include coronary heart disease, diabetes mellitus, sepsis, and an overdose of medications for the treatment of asthma. MAT is also more likely to occur in patients with postsurgical conditions, particularly within the first six weeks post-surgery.

In the majority of cases, there are no symptoms of multifocal atrial tachycardia present. If symptoms are present, they can vary greatly in severity depending on the age of the patient. Symptoms include tightness or pressure in the chest, increased heart rate, shortness of breath, syncopal episodes, and dizziness.

How is multifocal atrial tachycardia diagnosed?

Most often, a multifocal atrial tachycardia diagnosis results from the diagnosis of the underlying medical condition associated with the patient’s MAT. Physical examinations are often inconclusive and can’t distinguish between MAT and atrial fibrillation or other heart conditions. A diagnosis of chronic obstructive pulmonary disease is seen in approximately 60 percent of patients showing multifocal atrial tachycardia. There is also a substantial link between MAT and cardiac diseases, often alongside chronic obstructive pulmonary disease.

To differentiate MAT from other cardiac ailments, an electrocardiography (ECG) is necessary. An ECG of a patient with MAT will show ventricular rates greater than 100 bpm,

Getting a differential diagnosis of MAT includes ruling out atrial flutter and atrial fibrillation. A conclusive differentiation of MAT from atrial fibrillation is crucial to determine the following plan of treatment. The two conditions differ greatly in how they are treated. MAT may also be misdiagnosed as ventricular tachycardia if the MAT has aberration or if the patient has a pre-existing bundle branch block. There is also the possibility that MAT can be misinterpreted as narrow-complex or narrow-wide tachyarrhythmias with consistent premature atrial contractions.

As MAT is so often linked to another medical condition in the same patient, its treatment is generally dependent on the treatment of the other issue. In the rare case that MAT presents on its own, beta-blockers and calcium channel blockers can be used for treatment of the irregular electric pulses that define MAT. If the medications are ineffective, surgical removal of the tissues causing the irregularities is another option. Patients who undergo this type of surgery generally require a pacemaker implantation later on to control their heart rate.

Multifocal atrial tachycardia is rarely fatal on its own, but also rarely presents without an underlying cause. There is a mortality rate of 45 percent associated with MAT due to the high frequency of comorbidity diagnoses. The patient’s survival rate has a higher link to the treatment of the underlying condition than it does with the accompanying MAT. If the associated medical condition is properly treated, MAT will often rectify itself.

MAT is a heart condition that causes an irregular heartbeat of over 100 bpm. This is caused by electrical pulses being sent from multiple areas in the heart at the same time. It is rare for MAT to develop on its own and it’s often a symptom of an underlying medical condition. Most patients do not show any symptoms of MAT, but there are certain causal conditions and risk factors to be aware of.

What does trigeminy mean? Causes, symptoms, and treatment