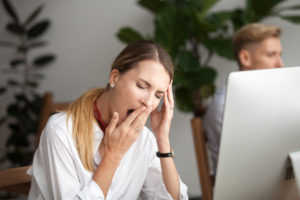 Many American’s are sleep deprived, and among some of the most affected are police, military, and health care workers. A new study published recently in the Journal of Community Health shows that those who work in critical care have the highest risk of not getting enough sleep.

Sleep deprivation is defined as not obtaining adequate total sleep. Those who suffer from short sleep duration will notice excessive daytime sleepiness, fatigue, clumsiness, and weight gain or weight loss. In addition, being sleep deprived affects both the brain and cognitive function.

Researchers analyzed data from more than 150,000 employed adults between 2010 and 2018. They found that the highest levels of poor sleep included the military and police (50%), health care support occupations (45%), transport and material moving (41%), and production occupations (41%). It was also noted that the rate of inadequate sleep (seven hours or less) rose from about 31% to nearly 36% during the research period.

“This is a significant finding because the U.S. is currently witnessing high rates of chronic diseases across all ages, and many of these diseases are related to sleep problems,” he said.

Men Are Most at Risk

It was found that among the participants, the largest increases in sleep deprivation were reported by older multiracial men. The majority lived in the western United States and were widowed, divorced, or separated.

“There is no definitive cause found for these trends in sleep duration in working [Americans],” Khubchandani said. “We see the workplace is changing as Americans work longer hours, and there is greater access and use of technology and electronic devices, which tend to keep people up at night.”

“Add to this the progressive escalation in workplace stress in the United States, and the rising prevalence of multiple chronic conditions could be related to short-sleep duration in working American adults,” Khubchandani said.

Studies such as this are important reminders that sleep can affect overall health. Not getting enough sleep can not only cause drowsiness but can also increase risk of chronic disease.

Researchers hope that this new information will help recognize the importance for employers to take steps to make sure their workers are getting enough rest.

“Employers have a major responsibility and should use health promotion strategies to ensure that workers who struggle with sleep problems are assisted,” Khubchandani said. “We all suffer when our bus and truck drivers, doctors, and nurses are sleep deprived.”