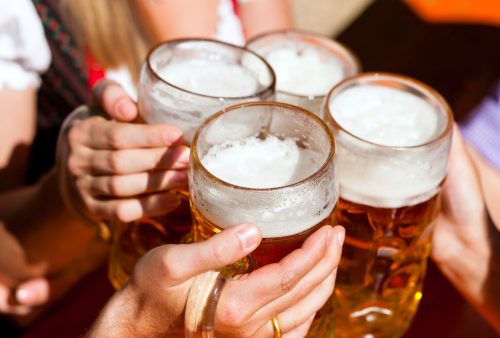 Here’s another good reason to raise your glass: Researchers found that moderate beer consumption in women was linked with a reduction in heart attack risk. Women who consumed beer no more than twice a week reduced their risk of heart attack by 30 percent. The findings were discovered by researchers at the University of Gothenburg.

The research followed 1,500 women over the course of 50 years (between 1968 and 2000). The researchers attempted to chart the relationship between a variety of alcohols and heart attack, stroke, diabetes and cancer.

The 1,500 women were asked about their beer, wine and spirit consumption and to report various symptoms. After a 32-year follow-up, 185 women experienced a heart attack, 162 a stroke, 160 diabetes and 345 developed cancer.

High consumption of spirits – more than twice a month – was associated with higher risks of cancer, compared to those who drank them less. But when women consumed beer once or twice a week or even once or twice a month, they reduced their risk of heart attack by 30 percent, compared to women who drank beer more often (daily) or who never drank it. The researchers then concluded that moderate beer consumption can be linked with lower risk of heart attack.

Researcher Dominique Hange said, “Previous research also suggests that alcohol in moderate quantities can have a certain protective effect, but there is still uncertainty as to whether or not this really is the case. Our results have been checked against other risk factors for cardiovascular disease, which substantiates the findings. At the same time, we were unable to confirm that moderate wine consumption has the same effect, so our results also need to be confirmed through follow-up studies.”

The findings were published in Scandinavian Journal of Primary Health Care.