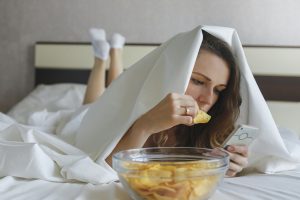 Getting a restful night of sleep is important for so many reasons. A new study from Ohio State University suggests missing out on the recommended seven or more hours of sleep per night could lead to poor snacking choices.

An analysis of data including 20,000 American adults found a link between lack of sleep and eating more snacks, including carbohydrates, added sugar, caffeine, and fats. Overall, these non-meal food categories are the same among adults regardless of sleep habits, but those with less sleep tend to eat more of them as snacks.

When people stay up late, they are not only losing sleep but are also engaging in many obesity-related behaviors, including lack of physical activity, increased screen time, and poor food choices.

The American Academy of Sleep Medicine and sleep research society recommends that adults sleep 7 hours or longer per night to promote optimal health. Getting less sleep has previously been associated with a higher risk of several health problems, including weight gain, diabetes, obesity, heart disease, and high blood pressure.

It is well known that lack of sleep is linked to obesity and chronic disease, but researchers believe that all these little behaviors could be anchored around how it happens.

For the study, researchers analyzed data from 19,650 U.S adults between the ages of 20 and 60 who participated in the National Health and nutrition examination survey.

The survey ran from 2007 to 2018. It collected 24-hour dietary recalls from each participant detailing all food consumed and at what hour of the day. Participants were also asked about their average amount of nightly sleep during the workweek.

Researchers found that almost everyone, 95.5%, consumed at least one snack a day, and over 50% of snacking calories came from unhealthy food choices. Compared to participants who slept seven or more hours a night, those who did not were more likely to eat a morning snack and less likely to eat an afternoon snack. However, they consumed much higher quantities of snacks with more calories and less nutritional value.

Researchers suggest there are a lot of physiological factors at play with sleep’s relationship to health. They suggest that changing behavior and avoiding nightly snacking, in particular, could help adults meet sleep guidelines and improve their diet and overall health.

“Even if you’re in bed and trying to fall asleep, at least you’re not in the kitchen eating – so if you can get yourself to bed, that’s a starting point,” concluded Christopher Taylor, study author.