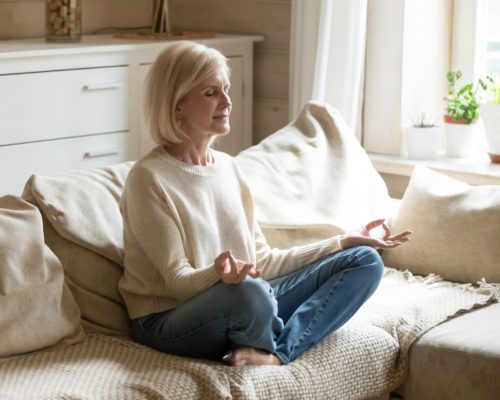 According to a small pilot study published in the Journal of Alzheimer’s Disease, and led by a neurologist and researcher with Wake Forest Baptist Health, mindfulness meditation could be a safe, non-pharmacological treatment that may help patients living with MCI.

Mindfulness meditation is a mental training practice that involves maintaining a moment-by-moment awareness of thoughts, emotions, and sensations. “It is simply the act of paying attention to whatever you are experiencing, as you experience it,” explains Kate Hanley, author of A Year of Daily Calm. “By choosing to turn your attention away from the everyday chatter of the mind and on to what your body is doing, you give the mind just enough to focus so that it can quiet down.”

Research has shown that high levels of chronic stress negatively impact the hippocampus, which is a part of the brain that is involved in memory and learning. It is highly associated with an increased incidence of MCI and Alzheimer’s disease.

Since mindfulness meditation involves breathing practice, mental imagery, awareness of body and mind, and muscle and body relaxation, it’s a perfect way to help relieve chronic stress, therefore lowering the impact on the hippocampus. Other studies have indicated that other non-drug interventions such as aerobic exercise can have positive effects on cognition, stress levels, and the brain.

“Until treatment options that can prevent the progression to Alzheimer’s are found, mindfulness meditation may help patients living with MCI,” said Rebecca Erwin Wells, M.D., M.P.H., associate professor of neurology at Wake Forest School of Medicine. “Our study showed promising evidence that adults with MCI can learn to practice mindfulness meditation, and by doing so may boost their cognitive reserve.”

“While the concept of mindfulness meditation is simple, the practice itself requires complex cognitive processes, discipline and commitment,” Wells explained. “This study suggests that cognitive impairment in MCI is not prohibitive of what is required to learn this new skill.”

For this study, researchers enlisted 14 men and women between the ages of 55 and 90 who had been clinically diagnosed with MCI and randomized them to either an eight-week course involving mindfulness meditation and yoga or a “waiting list” control group.

As this was not the first study that this team had participated in, they previously reported that the nine participants who completed the mindfulness-based stress reduction (MBSR) program showed trends towards improvement on mental cognition and well-being. There are two important indications of positive impacts on the hippocampus as well as other areas of the brain associated with cognitive decline.

This new information adds context to those previous findings that showed participants who practiced at least 20 minutes a day were most likely to have understood the underlying concepts of mindfulness.

“While the MBSR course was not developed or structured to directly address MCI, the qualitative interviews revealed new and important findings specific to MCI,” Wells said. “The participants’ comments and ratings showed that most of them were able to learn the key tenets of mindfulness, demonstrating that the memory impairment of MCI does not preclude learning such skills.”

This new information will help to continue the search for non-pharmacological treatments that can reduce the risk of dementia and other cognitive impairments in the elderly. However, there are still many studies needed to confirm findings as the limitations of this study include the small sample size. Also, the results may not generalize to all patients with MCI, as two-thirds of the participants in this study had a college education or more.