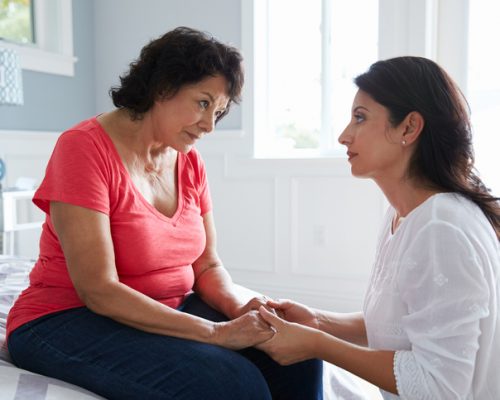 The researchers also found that mild cognitive impairment patients who reported anxiety at any time during the follow-up period of the study had greater rates of atrophy in the medial temporal lobe region, an essential part of the brain responsible for creating memories that is often affected in Alzheimer’s disease.

Principal investigator of the study Dr. Linda Mah said, “Our findings suggest that clinicians should routinely screen for anxiety in people who have memory problems because anxiety signals that these people are at greater risk for developing Alzheimer’s. While there is no published evidence to demonstrate whether drug treatments used in psychiatry for treating anxiety would be helpful in managing anxiety symptoms in people with mild cognitive impairment or in reducing their risk of conversion to Alzheimer’s, we think that at the very least behavioral stress management programs could be recommended. In particular, there has been research on the use of mindfulness-based stress reduction in treating anxiety and other psychiatric symptoms in Alzheimer’s and this is showing promise.”

The researchers analyzed anxiety, depression, and cognitive and brain structural changes in 376 adults over the course of three years. These changes were assessed every six months. All participants had diagnosed MCI with low scores on the depression scale, which indicated that anxiety was not part of depression.

MCI is a known risk factor for Alzheimer’s disease progression. Many MCI patients go undiagnosed until their condition progresses to Alzheimer’s.

The study found anxiety to be a predictive factor for Alzheimer’s disease in a patient with MCI.

There are numerous causes for anxiety in seniors, including changes in location, environment, or caregivers, misperceived threats, fear, and fatigue. In order to calm agitation and prevent anxiety among seniors, especially those with memory troubles, follow some of the below tips.

By following some of these tips, you can have greater success in managing and preventing anxiety in the senior patients’ life.