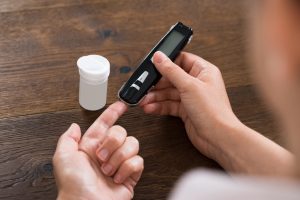 Midlife diabetes diagnosis is linked to faster memory and cognitive decline and dementia progression during the next 20 years, according to research findings. The researchers found that diabetes ages the mind up to five years faster, compared to normal effects of aging.

The researchers used data from Atherosclerosis Risk in Communities Study (ARIC), which followed 15,792 middle-aged adults. There were four follow-up visits, three years apart, and then the fifth follow-up was between 2011 and 2013. Cognitive function was evaluated on the visit two and visit five.

Selvin added, “If we can do a better job at preventing diabetes and controlling diabetes, we can prevent the progression to dementia for many people. Even delaying dementia by a few years could have a huge impact on the population, from quality of life to healthcare costs.”

Coauthor A. Richey Sharrett added, “There are many ways we can reduce the impact of cerebral blood vessel disease — by prevention or control of diabetes and hypertension, reduction in smoking, increase in exercise, and improvements in diet. Knowing that the risk for cognitive impairments begins with diabetes and other risk factors in midlife can be a strong motivator for patients and their doctors to adopt and maintain long-term healthy practices.”

In an alternative study, researchers found that preventing or effectively managing diabetes can help delay or manage cognitive decline. The study included over 3,069 adults over the age of 70 who provided periodic blood samples and took regular cognitive tests during the study period.

At the beginning of the study, hundreds of the patients had diabetes. After a decade, more participants developed diabetes along with cognitive decline.

Although the study highlights a link between diabetes and cognitive decline, how the two are associated is still very much unclear. It may have to do with insulin degrading enzyme present in both diabetes and dementia. Instrumental in insulin regulation, this enzyme also degrades beta-amyloid in the brain, a protein associated with cognitive decline.

In the meantime, it is imperative that you reduce your risk of diabetes or properly manage the condition if you do have it.

Why your diet could be blamed for failing memory