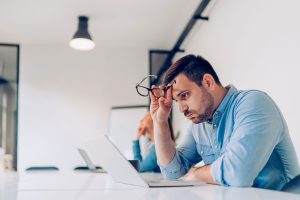 According to a new study published in the Journal of the American Heart Association, middle-aged men who are anxious and worried could be at greater biological risk for developing type 2 diabetes, heart disease, and stroke. This research shows that these associations may be present much earlier in life than is commonly expected, potentially during childhood or young adulthood.

For the study, researchers tracked anxiety and cardiometabolic disease in 1,561 men who were an average age of 53 years. All participants were enrolled in the Normative Aging study founded at US Veterans Affairs outpatient clinic in Boston in 1975. All men completed baseline assessments of neuroticism and did not have cardiovascular disease or cancer at that time.

Neuroticism is a personality trait known to interpret situations as threatening, overwhelming, or stressful. Previous studies have shown that individuals with high levels of neuroticism are prone to experience negative emotions such as anxiety, fear, anger, and sadness more intensely and more frequently than those without the condition.

All men had physical exams and blood tests every three to five years until they either died or dropped out of the study. The research team also used follow-up data through 2015.

Treatment of Anxiety and Worry

Although more research is needed to confirm these findings in populations other than white males, researchers suggest that the treatment of anxiety and worry could help to lower your cardiometabolic risk factor.

Heart health should be taken seriously at any age. As this study helps to show, it is vital to understand risk factors so preventative actions can be taken. Heart Rescue has been specially formulated to help support and promote cardiovascular health using various ingredients, including CoQ10, omega-3 fatty acids, magnesium, and hawthorn extract.

Middle-aged men who have anxiety or worry could also be at a higher risk of developing diabetes. Our Healthy Blood Sugar Support formula uses several ingredients which have been shown in human clinical studies to help support healthy blood pressure. It can also help reduce excessive hunger or increased appetite, fatigue, and blood glucose spikes after meals.