Home » Health News » Men’s Sleep Quality May Depend on the Lunar Cycles: Study 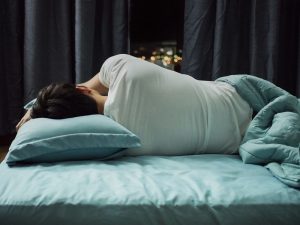 It is known that lunar cycles have an influence on human reproduction, but new research is suggesting it may also affect other human behavior, including traffic accidents, suicide, crime, and sleep.

A study published in the journal Science of the total Environment has found that men’s sleep, in particular, may be more influenced by the lunar cycle compared to women.

Previous research has not been able to draw any conclusions about the association between the lunar cycle and sleep. There have been conflicting results previously, which researchers believe are due to chance findings. Past studies were also not controlled for confounders known to impact sleep, such as obstructive sleep apnea and insomnia.

This new study analyzed one-night, at home recordings from 492 women and 360 men. Researchers found that men’s sleep during nights in the waxing period of the lunar cycle had lower sleep efficiency and increased time awake during the night compared to men’s sleep patterns on nights during the waning period.

The women who were analyzed in the study showed sleep patterns that were largely unaffected by the lunar cycle. All results were adjusted for chronic sleep problems and obstructive sleep apnea severity.

There are two main parts of the lunar cycle.

During the waxing period, the amount of illuminated moon surface seen from Earth increases, and the moment the moon crosses a location’s meridian slowly shifts to later in the evening. In contrast, the waning period has an illuminated surface decrease, and the moment that the moon crosses a location’s meridian gradually shifts to daytime hours.

The corresponding author of the study, Christian Benedict and her team, suggest that the male brain may be more responsive to ambient light compared to females. Depending on the lunar cycle, the moon may be brighter from the reflection of the sun, causing it to be brighter outside when people usually go to bed. This could be one reason why men are more affected by the lunar cycle.

“Our study, of course, cannot disentangle whether the association of sleep with the lunar cycle was causal or just correlative,” concludes Benedict.

For both men and women, sleep experts recommend some simple lifestyle adjustments for better sleep. Make sure the room is dark with no outside light. Turn off all electronic devices a couple of hours before bedtime, and meditate to help destress from the day.