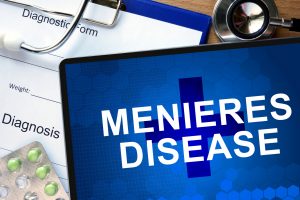 Meniere’s disease may be caused by fluid buildup in the inner ear along with risk factors for vascular disease in the brain, such as migraine, sleep apnea, and atherosclerosis. Meniere’s disease affects roughly three to five million Americans and causes repetitive violent attacks of dizziness, ringing in the ears, and hearing loss. Until now, its causes have been unknown.

Researcher Carol Foster said, “If our hypothesis is confirmed, treatment of vascular risk factors may allow control of symptoms and result in a decreased need for surgeries that destroy the balance function in order to control the spell. If attacks are controlled, the previously inevitable progression to severe hearing loss may be preventable in some cases.”

Foster explained that Meniere’s disease attacks may be brought on by two factors. The first is the malformation of the inner ear and the associated buildup of fluid. The second is risk factors of vascular disease in the brain, like migraines, smoking, atherosclerosis, and sleep apnea.

A buildup of fluid in the inner ear may signal the presence of a pressure-regulation problem, which means decreased blood flow within the ear. When any of the risk factors for vascular disease pitch in, further reducing the blood flow to the brain and ear, one can experience sudden loss of blood flow – like in transient ischemic attacks (mini strokes).

This may explain why younger individuals who have fluid buildup but do not have any risk factors for vascular disease do not experience Meniere’s disease attacks or blood flow fluctuations. At the same time, the presence of the risk factors for vascular disease aggravates the blood flow reduction so much that the tissues in the ear end up starving for blood, triggering vertigo, tinnitus, and even hearing loss.

Unfortunately, restoring blood flow does not seem to resolve the problem. In fact, it may actually have damaging after-effects, which scientists refer to as ischemia-reperfusion pathway, in the excitable tissues of the ear. These effects can silence the ear for several hours and result in prolonged vertigo along with hearing loss, which is typical in Meniere’s disease.

If this theory is confirmed, the findings may lend themselves to new treatments for Meniere’s disease, which as of now is a poorly controlled disorder.

Associated with repetitive attacks of vertigo, tinnitus, and even hearing loss, Meniere’s disease can be a challenging condition to live with, as there is currently no cure available. On the other hand, there are home remedies and lifestyle changes you can try to better manage and control your condition and live a better life.

By following these tips and the treatment plan set out by your doctor, you can have greater success in managing your Meniere’s disease.

Tinnitus is a key symptom of Meniere’s disease, an inner ear disorder