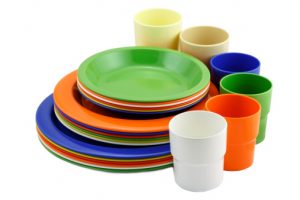 Of the environmental factors that causes illness, researchers are serving this one up on a platter – a melamine platter. According to researchers at the American Chemical Society, the melamine found in plates and bowls could seep into food and cause adverse health issues.

The dinnerware under fire is made from melamine resin, a synthetic polymer. The researchers suggest that stainless steel alternatives should be used if people are serving hot foods. They said heat and acid could cause the melamine to enter to the body.

The report was published in the American Chemical Society’s journal Environmental Science and Technology.

Melamine came under fire in 2008 after 300,000 people in China became sick. The exposure was linked to baby formula and about 50,000 children were sickened. Another controversy occurred when melamine was found to be included in pet food. Since then health officials have been working to ensure melamine isn’t added to food. The substance continues to be used as an industrial chemical however, and is often part of plastics, flooring and whiteboards.

Some research has suggested mild exposure to melamine could cause kidney stones. According to the U.S. Food and Drug Administration (FDA), when melamine and cyanuric acid are absorbed into the blood it can cause kidney malfunction. However this type of melamine poisoning is sourced typically from fire retardants, not the dinnerware.

Ming-Tsang Wu and his team wanted to see what kinds of practices could lower people’s exposure. The researchers measured the melamine levels found in the urine of people enrolled in the study. When the study participants changed from using melamine plates to stainless steel and silverware for their hot meals, the researchers found the levels decreased by 41 to 92 percent. The researchers noted that the participants could have been exposed to melamine in other ways, which would account for the wide range.