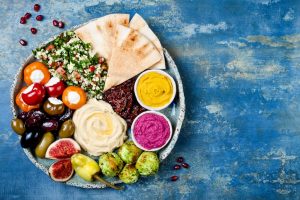 A new study from the University of East Anglia has found that following a Mediterranean-style diet can reduce the risk of stroke in white women over the age of 40, but not in men. The diet is characterized by an increased intake of fish, fruit, vegetables, nuts, and beans, and a decreased intake of meat and dairy.

The study is qualified as one of the largest, with the longest follow-up period. It was performed over 17 years and included 23,232 participants. They asked the participants to record their food intake for seven-day periods at a time in a food diary, which has shown to be a more accurate method of information gathering than food surveys or questionnaires performed after the fact.

The participants were all Caucasian and between the ages of 40 and 77. They were divided into four groups based on how closely they followed the Mediterranean diet. The group that followed the diet most strictly showed a reduced risk of stroke.

The breakdown of the diet’s impact was a 17 percent reduced risk of stroke in all adults, a 22 percent decrease in the women, and a 6 percent decrease in the men. The researchers believe that the risk reduction in the men was statistically insignificant and may have been a fluke. The results were found to be true despite menopause or any hormone replacement therapies that the women had undergone.

Diet Reduces Risk in Women but Not Men

“This research shows us that following a Mediterranean-style diet rich in fish, fruits and nuts, vegetables and beans, and lower in meat and dairy, may reduce stroke risk for women over 40,” said lead researcher Ailsa Welch. “But a healthy, balanced diet is important for everyone both young and old. It is unclear why we found differences between women and men, but it could be that components of the diet may influence men differently than women. We are also aware that different subtypes of stroke may differ between genders. Our study was too small to test for this, but both possibilities deserve further study in the future.”

The results also showed an overall decrease in the risk of stroke by 13 percent in the participants who were at a high risk of cardiovascular disease no matter how strictly they followed the diet recommendations. These results were mainly found in the group of women who had an already reduced risk of 20 percent and again, the researchers attribute the additional reduction of risk of stroke in the other participants to random chance or unaccounted for lifestyle factors outside the study guidelines.

“Our findings provide clinicians and the public with information regarding the potential benefit of eating a Mediterranean-style diet for stroke prevention, regardless of cardiovascular risk,” said another of the study’s authors Phyo Myin.