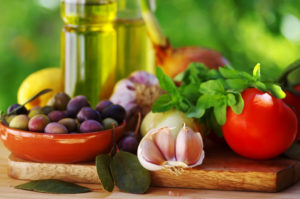 The risk of aging-related diseases could be affected by the consumption of oil olive as part of a Mediterranean diet plan. Researchers at the University of Minnesota Medical School have discovered this new potential way in which diet influences these age-related diseases.

It was previously thought that red wine found in the Mediterranean diet was the main protector against the disease risk, but this new discovery shows how it is the olive oil that holds the key to improving lifespan. Since red wine contains a compound called resveratrol, which activates a certain pathway in cells known to increase lifespan and prevent aging-related disease, it was thought to be the main item found in the diet that would impact health the most. However, this new study suggests that it is actually the fat found in olive oil, another component of the Mediterranean diet that is activating this pathway.

Consuming Olive Oil Is Not Enough

Doug Mashek, Ph.D., a professor in the Departments of Medicine and Biochemistry, Molecular Biology and Biophysics, led the team of researchers who discovered that olive oil in the Mediterranean diet could be the key in mitigating aging-related diseases. Published in Molecular Cell, the research found that merely consuming olive oil is not enough to prompt all of the health benefits, but paired with fasting, limiting caloric intake, and exercise, the effects of consuming olive oil would be most beneficial for preventing chronic disease.

“We found that the way this fat works is it first has to get stored in microscopic things called lipid droplets, which is how our cells store fat. And then, when the fat is broken down during exercising or fasting, for example, is when the signaling and beneficial effects are realized,” Mashek said.

This small study is just the beginning of the research on the effects of fat found in olive oil in the Mediterranean diet. The next steps for the researchers are to translate it to humans with the goal of discovering new drugs or to further custom dietary plans that can help to improve health, both short-term and long-term.

“We want to understand the biology, and then translate it to humans, hopefully changing the paradigm of healthcare from someone going to eight different doctors to treat his or her eight different disorders,” Mashek said. “These are all aging-related diseases, so let’s treat aging.”

Previous studies have shown the health benefits of the Mediterranean diet, so while researchers are still trying to pinpoint the exact reason for the diet to be so beneficial, one thing remains the same. Everyone can benefit from the anti-aging properties by following the diet.