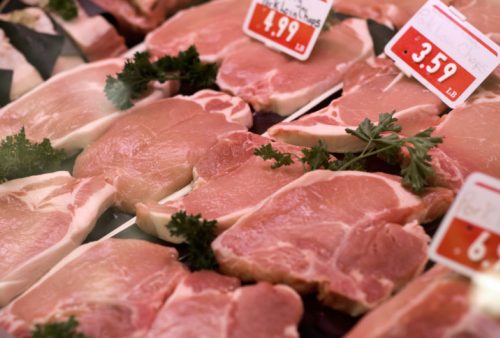 For many people living in North America, meat is a staple of the diet.  We indulge in it for taste, for nutrition, and with the growing popularity of high-protein diets, even for weight loss. But for those of you who choose to regularly indulge in meat and meat by-products, recent statistics collected by the FDA have uncovered that you may be unknowingly biting off more than you can chew.  Regular meats sold in butcher shops and supermarkets are accompanied by several other health-harming components that aren’t listed on the ingredients label.

What Goes Into Our Meat

For over 40 years, the FDA has acknowledged that animal sources of meat have contained antibiotic-resistant bacteria, also known as superbugs. Today, these superbugs are still around, perhaps even stronger than they were before. The superbugs in meat products pose a serious risk to our health, causing potential food-borne illnesses and antibiotic resistance.

Farmers and food producers who look after animals claim that antibiotics are used to keep the animals healthy, prevent and control illness, and encourage growth. Dawn Undurraga, a nutritionist for the Environmental Working Group (a health research and advocacy group) stated, “we don’t have a problem with treating animals with antibiotics when they are sick, but just feeding them antibiotics to make them get bigger faster at a lower cost poses a real problem for public health.” This means that animals are unnecessarily overfed antibiotics, and, when eaten by humans, our bodies build a resistance against medications that we may need.

Unfortunately, many of the farms are unsanitary and overcrowded with animals, which results in the perfect atmosphere for bacteria to spread, become more resistant to antibiotics, and create more superbugs. Once these superbugs are formed, they are transferred from the meat to the supermarkets, and ultimately right into our homes and dinner tables.

By purchasing and eating these contaminated meats, it  becomes easier for your body to develop a resistance to antibiotics. As a consequence, any sickness that could simply be treated with an antibiotic may require further medical assistance, and the illnesses may become more difficult to treat. Many health complications can arise when an illness is not properly treated, or when a person becomes resilient to medication.

More than half the samples of ground turkey, pork chops and ground beef collected by the federal government from supermarkets contained a bacteria resistant to antibiotics. These finding, discovered in 2011 by the National Antimicrobial Resistance Monitoring System, is a collaboration of the Food and Drug Administration, the Agriculture Department and the Centers for Disease Control and Prevention. They also found high amounts of meat containing antibiotic-resistant forms of bacteria, such as salmonella, E. coli and campylobacter. This means that the meat we buy from our trusted neighborhood supermarkets and feed to our families can actually contain bad bacteria and increase resistance to antibiotics.

As if this wasn’t stomach-turning enough, many sources of meat were tested for the enterococcus bacteria, which is fecal contamination. This particular bacterium is easily resistant to antibiotics, and can cause serious illness among humans. A 2011 study also revealed that 9% of the chicken breasts, thighs and wings were contaminated with a form of salmonella that resist antibiotics as well. Moreover, 26% of these chicken parts were tainted with antibiotic-resistant campylobacter. As for ground turkey, 10% tested positive for salmonella.


Be Watchful of What You Buy

Although a high-protein diet can be extremely healthy, it is crucial to inspect and keep a mindful eye when buying animal products. Removal of antibiotic use in animals would lessen the amount of bacteria and antibiotic-resistance which we now know can be very harmful.

There are organic meat options available which aren’t injected with hormones or antibiotics. Raising organic meats also promotes humane animal treatment in which animals are not fed other animal remains and are less exposed to pesticides or chemical fertilizers. While this option may be costly to your grocery list, it may be the best option to protect you and your family.

If you’re considering going off meat and opting for a vegetarian diet, there are other healthy, natural sources of protein available. No matter the diet you choose, try adding something legumes, nuts, cheese, or soy to your diet. These are incredible high-protein sources that can benefit your health and prevent the risk of bacteria and antibiotic resistance found in some meat sources.