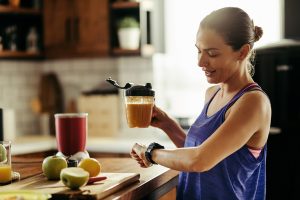 Sometimes when it comes to good health, it’s not about what you eat but when.

Your body may have optimal times to absorb and utilize calories, and ignoring them may lead to potential health troubles in some people. At least that’s the takeaway from a new study published in the Journal of Endocrinology and Metabolism.

A research team that has previously done work on meal timing took a look to see if there was an association between cardiovascular disease and the timing of food intake among people with diabetes.

The researchers analyzed data from the United States National Health and Nutrition Examination Survey. They looked at information from 4,643 people with diabetes between 2003 and 2014.

Participants self-reported the types and times of food they ate on two non-consecutive days. The team then linked this information to data on whether the participants died of heart disease.

They found some association between the timing and types of food with heart-related death.

For example, they noted that people who ate starch veggies in the morning, whole grains in the afternoon, and darker vegetables at night were less likely to die.

These findings are generally consistent with other work looking at nutrition and metabolism. Eating calorically dense, starchy food earlier in the day, and going lighter as the day goes on, is generally associated with positive blood sugar and heart health outcomes.

Although this study does not prove anything, it does indicate that meal timing may play a role in heart health, particularly for diabetics.

In general, it is a good idea to stay away from calorically dense foods in the evening. Eating big meals late can throw your gut bacteria and metabolism for a loop, and it may also mess with sleep patterns. These problems may contribute to heart issues over time.